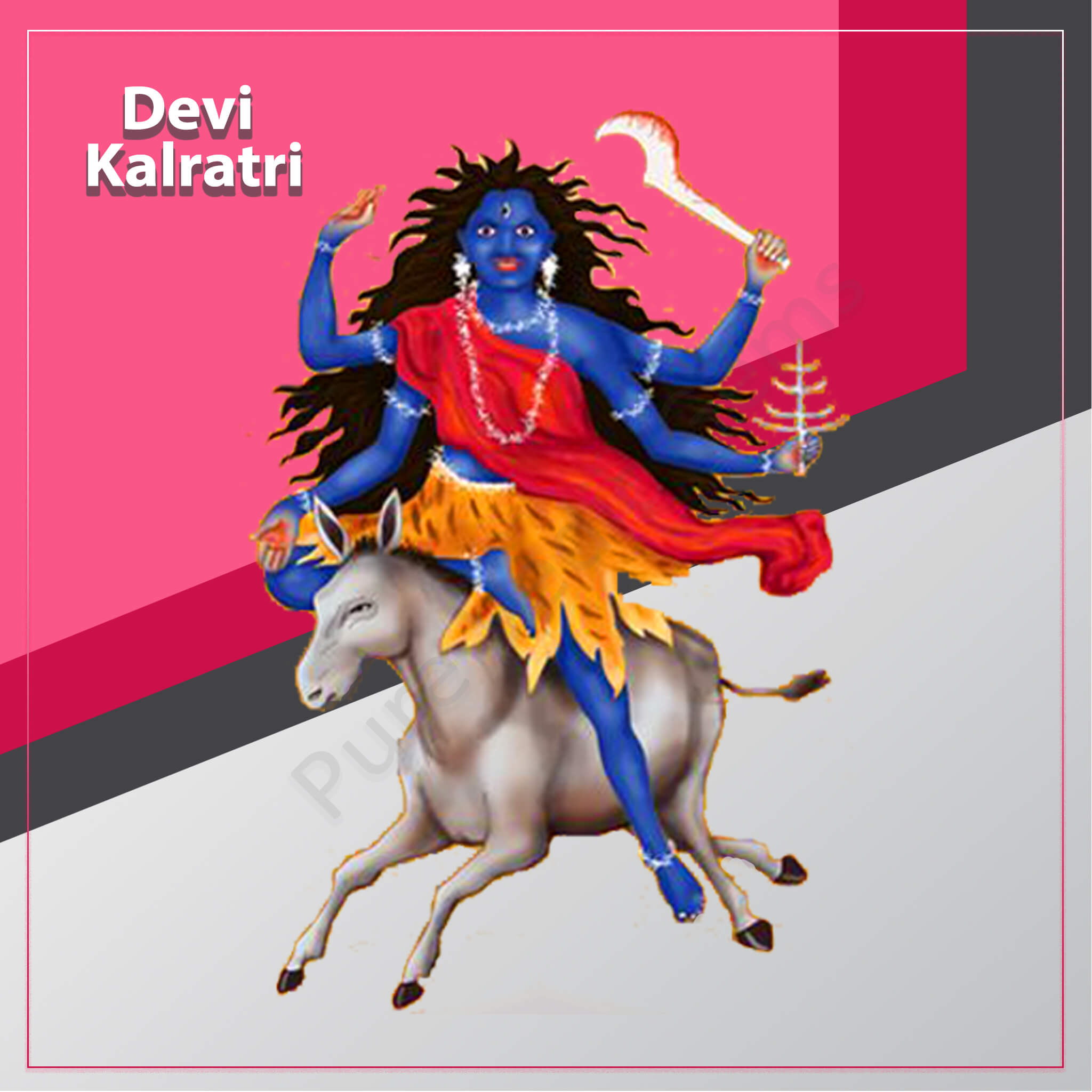 Maa Kalaratri – The Worship of the Fiercest Forms of Godess Durga on 7th Navratri :-

Maa Kalaratri is the seventh Shakti form of Maa Durga. The seventh day of Navratri pooja is dedicated to Durga Kalaratri. This is the most violent forms of Godess Durga. Kalaratri is one of the Fiercest forms of Durga and her appearance Itself evokes fear. This form of Goddess Is believed to be the destroyer of all demon entities.

Kalaratri means the One who is “the Death of Kaal” Here Kaal is dedicated as time of death. Kalaratri is the one who destroys ignorance and removes darkness. This form primarily depicts that life also has dark side – the violent Mother Nature creates havoc and removes all dirt. She is also known as Shubhankari. In this form Goddess Kalratri killed Raktabeej. Raktabeej was a demon who could multiply from every drop of his blood which fell on the ground. The Goddess Kaalratri killed him by Licking the blood before it could reach the ground and hence conquered him. She endows her devotees with calm and courage. The complexion of Maa Kalaratri is Like dark night with bountiful hair and has four hands. The left two hands holds a cleaver and a torch, and the right two are in the mudras of “giving” and “protecting”. She has a necklace which is so shining like thunder and made of skulls. She has three eyes which emanate rays like lightning. Flames appear through her nostrils when she inhales or exhales air. Her mount is donkey. Blue,Red, White color clothes should be worn on this day.

Appearance of Maa Kalratri is very dangerous. But she always gives good Fruits. So devotees should not be afraid of her. Her worship on 7th day of Navratri has much importance for yogies & sadhaks. Yogis & sadhaks penance on Shahtra Chakra on this day. For the worshipers, on this day the doors open of every siddhi in the universe. Any type of fear one has, goes away. Subhankari Mata always gives ‘Shubh’ good fruits but true Faith, restraint & concentration is necessary for worship.
Mata Kaalratri’s shrine is in Calcutta (India).
Kaalratri Devi is the scourge of darkness and a reviver, mender of damaged relationships and opportunities. We see grey, purplish silver and gold lights activating feet chakra of her devotees – this gives access to the lower universes of darkness destroying negative karma from past lifetimes and also brings energies of protection, fortitude and strength, helping the devotee to become fearless. Negative energies are being processed through the roots of all plants and those not eating grains would specially benefit. The feet and toe chakras are activated to go forward into the light fearlessly and to actualize goals, which were Impossible to you and your mind. Old stuck business activities or opportunities can be revived, resolved, and broken relationships mended, and one becomes famous through the blessings of Kaalratri Devi. Spiritually empowering energies are flowing through her eyes to all beings during this navaratri day and night.
Offer Seven “cheekoo” fruits (sapota or mud apple) in the morning; accept and share in the evening, offer candle/lamp morning and evening and offer all fragrant flowers, fruits, gems, clothing. All poverty is destroyed and there is wealth for all as you offer rose water on a silver naag /naagin and keep them.

The worship of Mother Kaalratri is of great significance in the vaam marga or the tantrik tradition. This is a day when the energies are focussed on the sahasrara chakra or the crown chakra, represented by the thousand petalled lotus. This is the realm of pure consciousness, where there is nothing but sat – chitta – ananda ! Supreme bliss and absolute truth!
From among the navratnas , the gem for the Sahasrara Chakra and that is similar in energies to Kaalratri is the blue sapphire (Also the gemstone for planet Saturn/Shani).

The Devi Kalratri is worshipped with the chant of following Mantra: