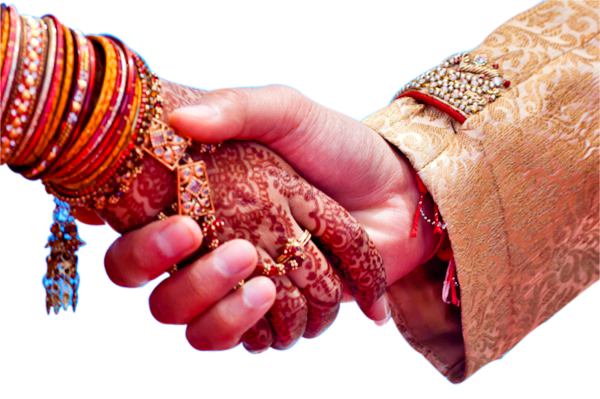 Marriage is a major milestone in the life of man or a woman. After marriage, a lot of changes happen due to the commitment of living with another person itself. Vedic Philosophy accords great importance to the institution of marriage. Hindus, consequently, have a deep and sacred respect for this social obligation. This aspect makes them go for matching of horoscopes before marriage. Since the marriage has to be in time, they go for arranged marriages as well. This arranged marriage is not very popular concept in West. Since arranged marriages are like treading the unknown, people are apprehensive about then. They want to know the outcome of marriage and the future of married life. Vedic system has astrology as its integral part, which can guide a person for marriage with a particular person. There are well-established ancient tenets of horoscope matching of prospective persons intending to marry in Vedic astrology. These tenets cover all aspects of the married life and guide the native about marriage.

But nowadays just like western cultures, even in India marriages do not necessarily happen in old fashion arranged manner. Young couples are dating each other and end up marrying without the matching of horoscopes. These days more women are working out of their homes. This leads to more marriages happening without matching of horoscopes. The result is that many such marriages go through lot of turmoil. Sometimes the problems are lopsided as the horoscope of one person may have combinations for marital felicity but the other Partner may not have. Thus, the marriage may look fine but one partner suffers.Generally, such problems can be helped by prescribing right type of gemstones to one or both the partners.

Apart from some of the love marriages having problems, even arranged marriages encounter similar problems. These marriages hit a rough patch even after matching of horoscope. These problems can  be due to a host of factors. Even during matching of horoscopes same of the factors do not match but the overall match is good and marriage happens. But that factor does erupt sometimes in the life and creates problems in married life. We have to be clear that a perfect match is not possible in this world. A compromise has to be there to go for a marriage. Sometimes, the dasa and antardasa period of a native can have adverse effect on the married life. Even transits of slow moving planets can affect one of the partners and lead to some marital discord. These problems can be handled very effectively by prescribing the right gemstones to one or the both partners.

Another type of relationship of present times is live-in relation. Partners due to various factors do not get married but continue to live together. They also want stability in this relationship and cordiality as well. Many times such couples also seek help for maintaining the relationship. Gemstones can help such people as well.

Another problem which many people face is the problem of delayed marriages. Most of the times we find parents of natives are worried as their children do not get married in time. This happens more in the case of girls. Many times even social pressures mount in these cases. This problem is not confined to India, but even in western countries it is there. If a girl is not dating a boy in her young age, then it is considered that something is wrong somewhere. Gemstones can help people in getting over effects of planets which delay and retard marital prospects.

In order to understand the problems in marriages and love life of People astrologically, we should first know the influences in a horoscope, which affect these areas of life.

Venus is a planet, which is karaka for marriage and love. In the case of females, Jupiter also influences marriage. The 7th house of a horoscope and the lord of the 7th house are also karakas for love, partnerships and marriage. Influence of Mars is high as far as passion, sex life and libido is concerned. In case of Males, Venus is the karaka for semen and potency. The 12th house of the horoscope has bed pleasures under its domain. Mercury being an eunuch planet can cause impotency in males. Thus, its effect must be considered closely.

Saturn being a slow malefic planet can lead to retarding influence on marriage while afflicting 7th house. Mars is a malefic in some positions as far as married life is concerned. It can delay marriages and causes a major dosha in a chart.

Thus, it can be seen that the love life and marriages pivot around a number of factors in a horoscope. The whole scenario is quite complex and can cause problems to people. If the Dasa and antardasa of a malefic planet is running, then such problems get compounded. But if the chart is interpreted correctly, then majority of the problems can be solved to a large extent by use of appropriate Gemstones.