Which mantra do Hindus consider most powerful?

There are innumerable mantras recited by Hindu devotees. None is as powerful as the Gayatri mantra. In the annals of time it is eternal. In the Puranas it is said that Brahma first received the mantra through a celestial call. He served as the creator of the world by virtue of the powers of reciting the mantra To give a better interpretation of the Gayatri, Brahma composed the four Vedas. Gayatri is therefore also known as Vedmata (mother of the Vedas).

The Gayatri mantra is the essence of the Vedas.
In the Brihadyogi Yagyavlkya Smriti, 10/10-11, it is said:

No pilgrimage is as holy as the Ganga. No God can equal Krishna. There is no mantra superior to chanting the Gayatri mantra. There never will be.

In the Devi Bhagwat, 11/21/5, it is said that Narsinh, Surya, Varah, Tantrik and Vedic mantras will be fruitless unless accompanied by the Gayatri mantra.

In the Agnipuran, 215/8, it is said that there is no better mantra for chanting than the Gayatri. However, it is not a mantra for oblations and offerings.

In the Bhagavad Gita, Lord Krishna has said:

Amongst the mantras I am the Gayatri mantra. 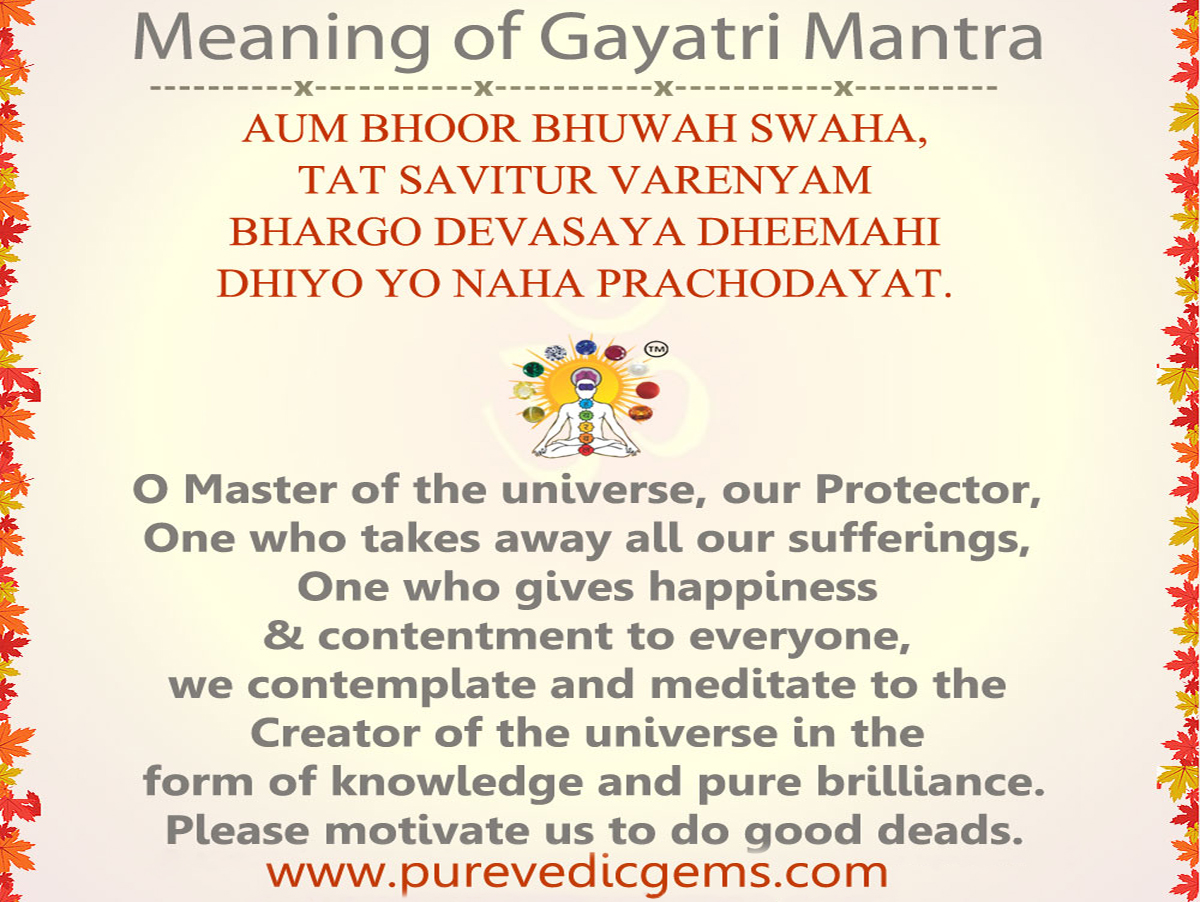 It is believed that within the 24 syllables of the Gayatri mantra, the strength of 24 saints and gods is included. Therefore when the mantra is chanted the hidden strength within it creates vibrations in the body increasing the flow of blood and improving the intake of oxygen. Thus, all maladies in the body are destroyed. Religious texts say that methodically chanting the Gayatri mantra removes obstacles affecting the body and the mind. It generates enthusiasm and positive activity, encourages noble thoughts, improves judgement, self-confidence, patience, compassion, peacefulness and contentment. Negative influences are eliminated. This promotes knowledge, creativity, insight, fame and longevity. It protects one from all kinds of problems and sudden death.

The meaning of the Gayatri mantra in detail

Om refers to the Supreme Spirit that sustains and protects everyone.  bhur means the land, the earth or the world that gives us life. Bhuv means one who takes away everyone’s suffering. Sva means one who gives happiness and contentment. tat refers to the Supreme Savitur means the Creator of all things, the mother and father of the world. — varainium is that which is outstanding and welcome.  bhargo refers to the purest verna like the rays of the sun. Devasya refers to what belongs to the Gods. dheemahi means contemplation. dheeyo denotes the mind and intellect. Yo refers to the Supreme Spirit. na means one’s. prachodayat denotes to motivate us to be involved in good deeds. In essence, the mantra means: 0 Master of the universe, our Protector, One who takes away all our sufferings, One who gives happiness and contentment to everyone, we contemplate and meditate to the Creator of universe in the form of knowledge and pure brilliance. Please motivate us to do good deeds.