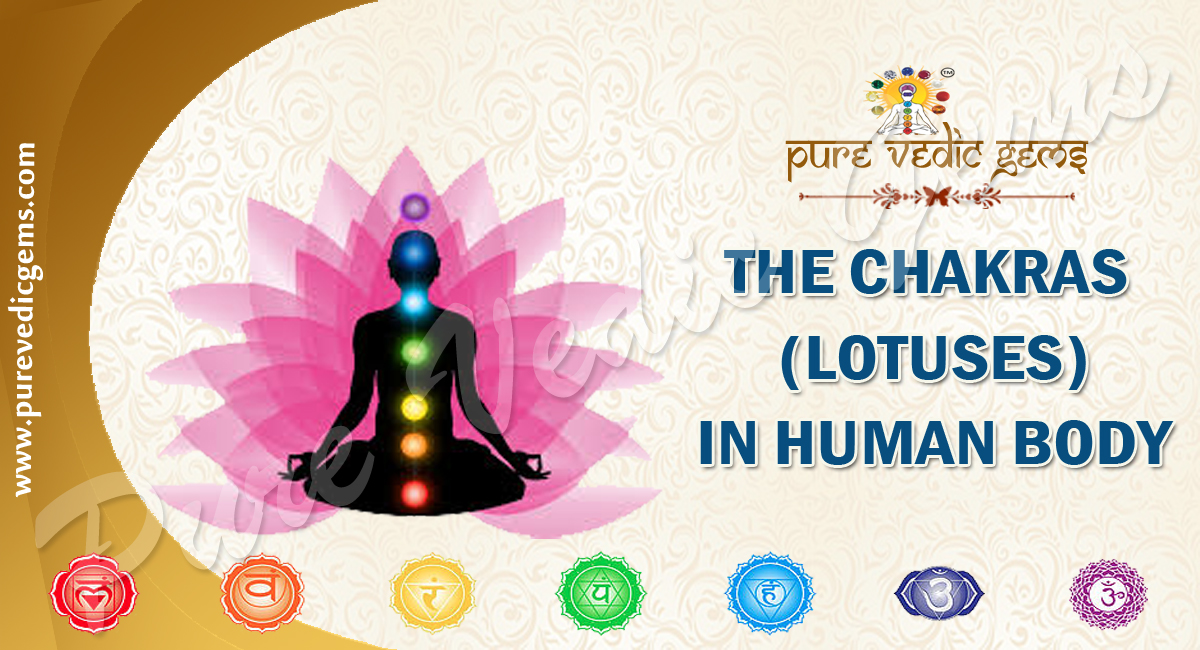 The seven Chakras or ‘lotuses’ are the higher energy-centers of our bodies, and are the channels or focal points through which cosmic energy is received, distributed, and regulated for different bodily functions. They are rotating vortexes, each with three concentric whorls of energy. They are traditionally said to be the ‘centers’ of consciousness situated within our subtle and astral bodies through which yogis direct the life-force to attain their ultimate goal.

The chakras absorb the seven cosmic rays, which are the sustenance for their functioning and thus the functioning of our gross physical bodies. When the rays are received in sufficient quantity, the chakras function properly and therefore the endocrine glandular systems which they regulate will also function in a healthy manner. When there is a lack of absorption of the cosmic radiating colors, then the chakras fail to continue their job completely on the subtle level, which then leads to disease invading the physical body. The energies that enter the hose chakras are transformed and then transmitted through the nadis (nerve-channels), which create the according response within strop the nervous system. These impulses then pass to the endocrine glands, which are the physical manifestations of the chakras in the gross body. These endocrine glands release hormones into our bloodstreams, thereby effecting the conditioning of our present conceptions and perceptions of who or what we are.

When a patient’s chakras are exhibiting dysfunction, the first thing an experienced healer will do is to check for blockages which restrict the free flow of cosmic energy that sustains them. When this blockage occurs, the energies can be ‘confined’ within the astral or mental bodies, thus causing psychological imbalances and mental disease. When the flow of energy is blocked at the exit point of the chakra, then we see the dysfunction of the gland associated with it. When treating dysfunctional organs in the body through gem therapy, the necessary Cosmic ray is transmitted through the chakra which rules it.

Another cause of dysfunction may be toxins. These may be chemical, bacterial, or from more subtle causes. The physical causes are easier to diagnose and treat, and better health can obviously be maintained if the patient resolves to curtail the intake of those substances which caused the problem to begin with. The subtle toxins, called miasms, are more difficult to determine and to treat, but can be treated through gem radiation initially through the base (muladhara) chakra. These miasms occur within the ethereal body and often are transferred to the physical body through severe emotional shock or a bad fall.

The chakras each have a ruling planet, and of course a cosmic color. They regulate the different elements of earth, water, fire, air, and ether within the body and their distribution in the body. They are the real ‘managers’ of the life-giving forces and of the smooth functioning of the physical body and rational mind. It should be noted that the cosmic colors used to replenish these energy-centers are not the same colors as the lotuses themselves.

The sahasrara chakra, also called the sat chakra or sahasra data karnalat is situated at the top of the head. It is the topmost chakra, and when the kundalini shakti has passed through the other six chakras to enter this realm, a state of supra-consciousness is achieved called samadhi. In the physical body it rules the glands which regulate and connect the lobes of the brain. This most important gland is called the pineal gland. The sahasrara is also the chakra which combines all the seven cosmic colors to function as a regulator of the life-airs and life-force within the body. It absorbs the cosmic green ray which is necessary for its functioning on all levels, and therefore Emerald is the gem used to nourish any color ‘hunger’ within this chakra.

The ajna chakra, situated at the forehead in position of the `third eye’ between the eyebrows, is also known as trikuti hen the yogi aising the life-force from the lower chakras to this one, all past karmas are burned up, and the door is opened to mukti or liberation from all identification with phenomenal imagery (including liberation from the notion of being the mirage-like image of a ‘successfully liberated’ yogi). Physically the trikuti is the center of conscious awareness from which all thought and action of the body is directed. It also rules the open passages within the head such as the nasal and ear passages, and regulates the nervous system as well. As it is related to the element of ether, it likewise rules the fat and glandular systems of the body, especially the pituitary gland, and is nourished by the cosmic blue ray, which can be supplied abundantly through using the Yellow Sapphire or Moonstone.

The visuddha chakra is the next chakra down and is situated at the base of the throat. It is said that the yogi who meditates upon this Ictus becomes free from any type of disease. This chakra has the function of stopping the entrance of foreign germs or viruses, maintains the thick lymph glands, and also rules the production of sperm. It rules the lungs, bronchial tubes, larynx, and the thyroid gland. It is related to the water element and is responsible for maintaining the general well-being of the entire body by keeping it free from infection. It absorbs the indigo cosmic color which is supplied by White Sapphire.

The anahata chakra is the next one down in the line of energy-centers. It is situated in the region of the heart, and so is commonly referred to as the ‘heart Chakra’. It rules over the skin on the body and so also the sense of touch. This chakra rules the heart, regulates the different airs moving within the body and thereby the circulatory system, and controls the function of the thymus. It is kept in function through absorption of the violet cosmic ray. As Blue Sapphire is the repository of violet cosmic color, this stone is used to replenish this chakra if it is out of balance.

The manipura chakra is situated above the navel and just below the solar plexus. It controls the pancreas and rules the stomach, liver, and gall bladder, affecting the nervous system as well. Not only does this chakra rule digestion, but the fire element or heat within the entire body. Therefore it is the regulator throughout the body of the cosmic red color that it receives from the cosmos. It also rules the eyes and therefore the comprehension of forms seen by them. The Ruby is an unlimited source of the cosmic red ray and therefore is used to restore the function and vitality of this chakra when red ‘hunger’ occurs.

Situated at the root of the sexual organs just below the navel is the swadhisthana chakra, which rules the reproductive system. This chakra rules over all thin secretions within the body, including the blood, and is the energy-center ruling the sense of taste experienced by us through our tongues. It is related to the element of water and regulates the flow of liquid evenly throughout the body. It is the orange cosmic ray that sustains proper functioning of this chakra, and Pearl is the gem which radiates this ceaselessly.

At the bottom of the spinal column is the muladhara chakra between the anus and the external genitals. It is the goal of raja-yoga to awaken the kundalini in this chakra, and once it is so aroused, the yogi is said to become free of the reactions to any previous inharmonious actions. It controls the adrenal glands and rules the spinal column and the kidneys. This chakra regulates the heat within the body and is related to the earth element. It is nourished by the yellow cosmic rays, and therefore its dysfunction is treated with Red Coral. Although both green and yellow cosmic rays are of the earth element, they are different in that green is cold earth and yellow is hot.