SUN IN THE 11th HOUSE OF HOROSCOPE

SUN IN THE 11th HOUSE OF HOROSCOPE 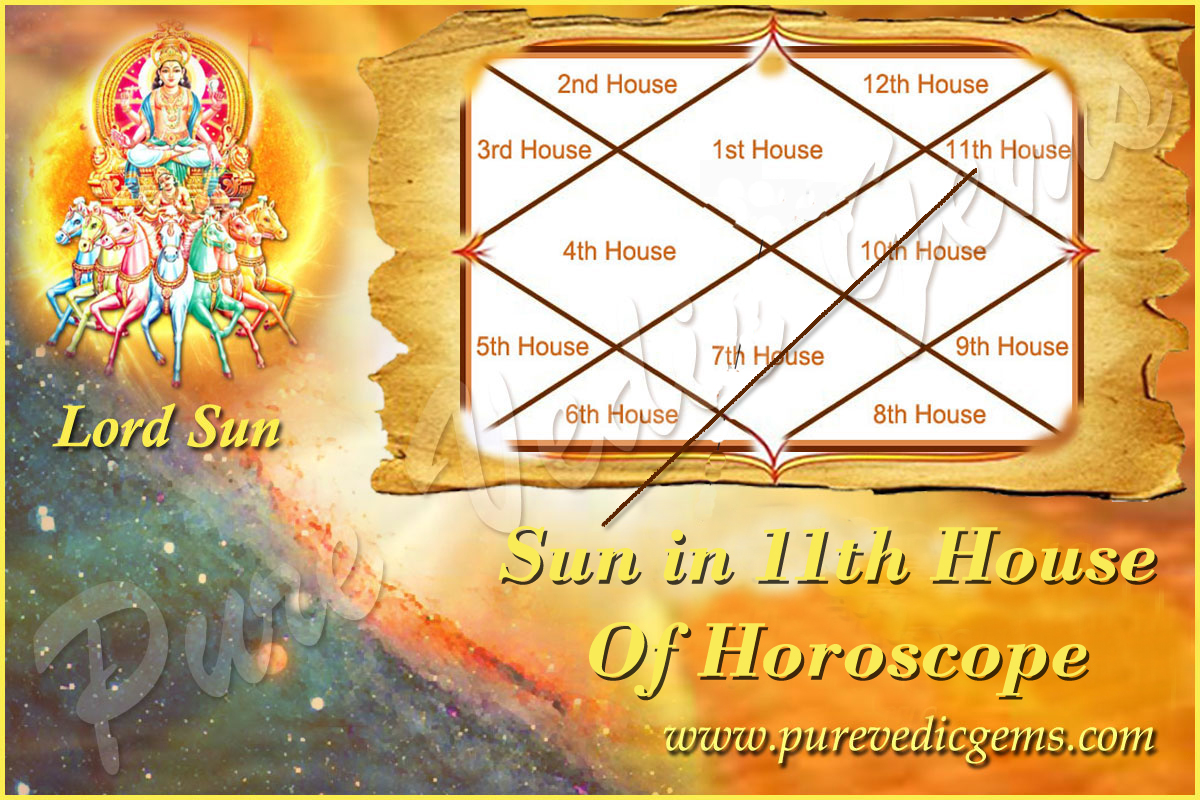 Sun in the 11th House

The 11th house is mainly concerned with Income,earnings, actual arrival of money in hand, and also mental  disposal of self towards progeny, and in later life with fiancee or lover or spouse of son daughter respectively. Other subjects for 11th house are loss or gains from a brother or sister, illegitimate children, left arm, left lower ribs, left breast or left portion of chest.

Sun, at least in the case of government servants, politicians in power, officers and staff in semi-government or public sector, gives a mixture of honest and dishonest income in cash or kind. Even if a government servant is honest, corrupt persons seeking favours make him or her dishonest. An example would make the point clear.

An Officer in the rank of Commissioner of Income Tax was know for his (real, not assumed) honestt. One very rich assessee wanted a favour from this Commissioner in an unjustified appeal in his tax assesment. When the Commissioner was out of town for a whole week on official duty, this businessman went to his residence, did not disclose own identity, and returned offer enquiring from the Commissioner’s wife as to when her husband was expected back in town. The businessman found that even holding  the rank of Commissioner, the officer had no fridge (refrigerator) at his residence. This businessman had a fridge sent to the Commissioner’s residence without disclosing the identity of even the dealer who supplied it. The unloader and an electrician installed it in the house of the officer. His wife enquired from the electrician but could not know who had sent it. The simple reply was. “the boss had ordered it”.

Not that it happens to be so in the case of every government servant. No, some of them, at least in India (a widely known fact that), are known to drop indirect and direct hints for gratification, like demanding precious-stone rings, jewellery for daughter’s or son’s marriage, free air passage to go abroad, etc. The senior author remembers examples from personal experience, and believes that now many officers in public dealing departments, like Income-tax. Customs, Central-Excise, Sales-tax, Police, Telecommunications. Public Works, Law Courts, Irrigation directly demand bribes in cash and openly haggle on the amount of the bribe. Some do so directly. while some have agents or family members as agents and conduits.

And many such corrup officers and members of staff have their own agents and sources to secretly invest this ill-gotten money.

One such officer of the public works Department would often obtain loans from his own provident Fund in office to establish that he was honest and needed money for day –to-day expenses, while the fact was that he was running a business in joint names of his wife and wife’s brother and was investing the loans from the Provident Fund into that business.

Sun is normally not a planet injurious to general health or any limb or part of the body, unless it is associated with some injurious planet. Sun causes at the most fever (sometimes high fever  if it is harmfully placed in the yearly chart), minor and easily curable skin ailment, or tolerable type of fluctuation in blood system. Sun generally does not associate itself with disorders of the menstrual cycle in females, unless linked with Mars, Venus or Saturn or Rahu.

One point is more or less certain about Sun. It doesn’t tolerate any love affair or even casual intimate (platonic type) friendship of the child with any member of the opposite sex, be it in the school or college or in neighbourhood or with an equal-aged child of a relative of the family. After the child reaches the normal age for marriage, the individual (father or mother) withSun in 11th house would he willing to consider, in an unbiased manner, any marriage-oriented love affair of the child, simply on merits and demerits. One major problem in this connrction is that the individual would attach due or undue importance to own family and its status as compared to that of the fiancée or the lover. However being a dignified planet, Sun is an easy surrender to convincing pleas of the child it self or of the individual’s spouse or any senior member of the member of the immediate family, or outsider intimate friend of the individual. Therefore in a case of controversy. it is always better for the child concerned to apply these sources of approach.

These individuals with Sun in 11th house would lose temper rather quickly too, but often suppress the anger and hot words, and would take resort to silence. When angry, they do shout, and later on regret it and often attempt a compromise and fresh understanding.

It is general belief that Sun gives only male children or at least a male child first of all, but it has not been found a very correct belief. Sun can give progeny of both sexes, of any sex in the first instance, and secondly, getting children or their sex depends on the planets of the spouse too, because no single individual can produce a child, whaterver the progress in the science of the modern world.

Person, who have SUN Planet in 11th  House with good aspect and placement or lord of 11th house then he or she can wear Ruby Gemstone (Manik). This will boost up their administration ability, business skills, successful career and help in business. If Sun placed with negative aspects then he or she must do Surya Shanti Yagya .

Note : Always wear Astrological Gemstones only after consulting your Horoscope with a Learned Vedic Astrologer –  www.purevedicgems.com/best-astrologer