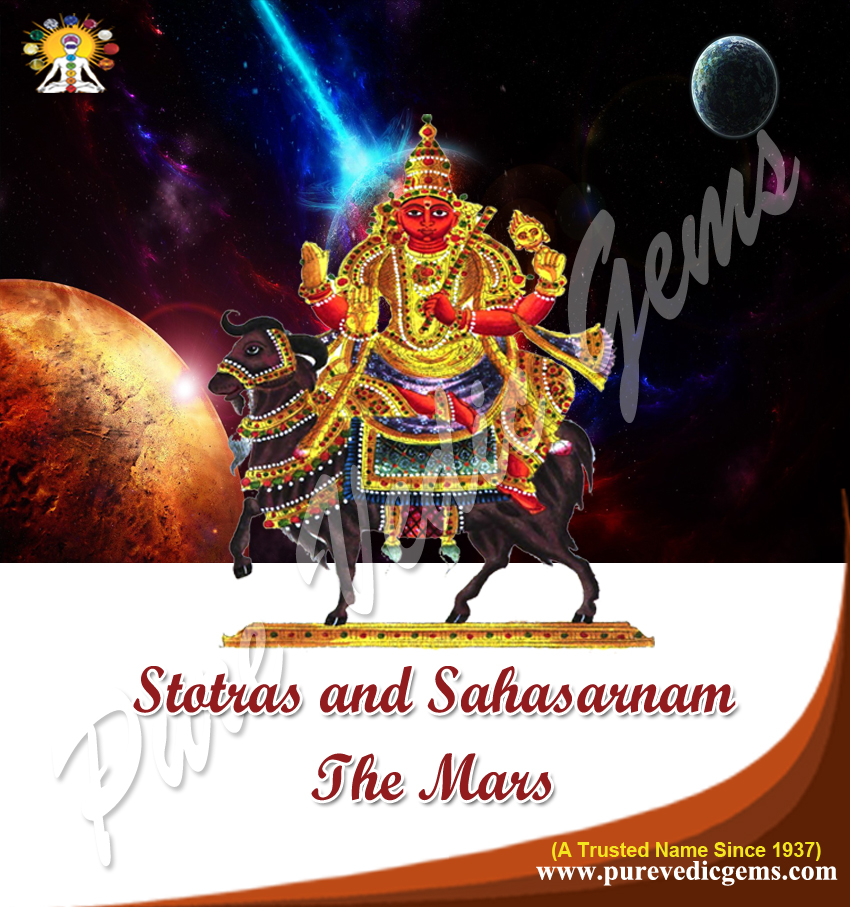 The Mars Mantra, Mars is considered as commander-in-chief. Hanuman ji is worshipped for propitiating Mars. It is a male planet. Being the lord of the battle it signifies courage of both types mental and physical. It is significator of designers, army or any of the belt forces, chemicals, dentists or persons holding executive posts. Of course, it also signifies younger brother. If the planet is holding weak position in the chart, the native may not have good relations with his younger brother and does not enjoy his support.

If Mars is posited in the ascendant, fourth, seventh, or eighth or the twelfth house, it is bad for the marital happiness. In such a situation, the immediate remedy is propitiation of Mars with its mantra. All those who are deprived off marriage even up to 30 to 40 years due to certain obstacles or married life is full of miseries or difficulties, threatened separation or divorce, should worship Mars to ward off these evils. Also Mars mantra works remarkably in case of repeated abortions, denial of children, for someone in debt and not able to repay in spite of honest intentions rather debt increases making life hell. All these difficulties can be over come by the worship of Mars. Mars helps the devotee to over come the above difficulties and one succeeds in all his efforts to achieve happiness and lead a comfortable life. When one is of rash temperament recital of Mars mantra is very useful. With this, one overcomes his enemies, gets protection from effects of poisonous articles. The mantra also removes the evil effects of Mars like injury, accidents etc.

Malefic position of Mars gives problems related to digestive system, neck, intestine, generative organs. When it is in close conjunction of Rahu it gives problems such as dysentery, typhoid, cholera and other diseases. Blood Pressure is also a significator of Mars. Hence, it is advised to those persons who are suffering from high blood pressure to keep Mars Yantra in their house and worship it daily.

Worship of Mars should be done during Siddha Yoga, on any Tuesday and the devotee has to do dasopchar pooja. It may be noted here that the mantra sadhana should end on Tuesday.

Worshipping Mars will bestow sons and wealth to the native. This mantra also bestows desired objects and eliminates debts. The sage of this Mantra is Virupa, the metre is Gayatri and the deity is Agni. The aspirant devotee should perform sadanga Nyasa with the six syllables of the Mantra. The devotee shall repeat the mantra for ten thousand times. The requisite number of Homas with the twigs of Khadira shall be performed. Mars should be worshipped in Saiva Pitha. When the mantra is perfectly realized, he should perform repeat rites for realization of specific desires.