Saturn in the 10th House of Horoscope

Saturn in the 10th House of Horoscope-

Saturn in the 10th House of Horoscope- 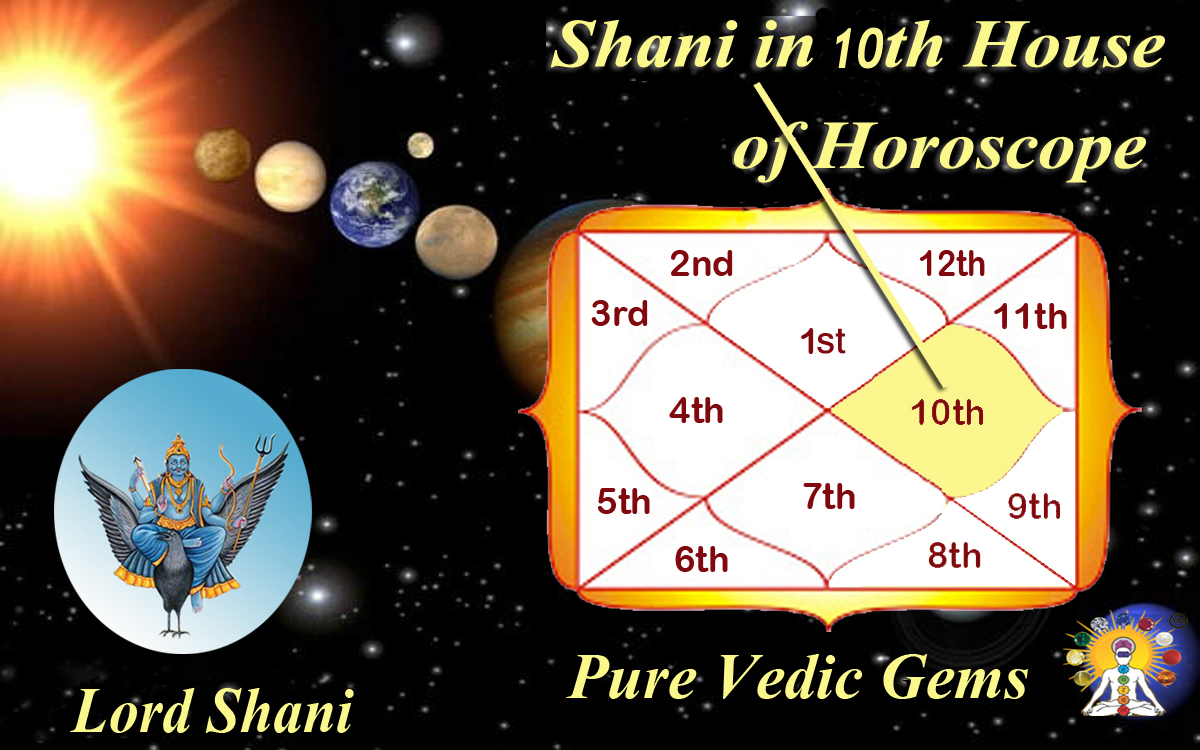 Benefits of Saturn in 10th House of Horoscope-

This is rather a delicate position of Saturn, because it can help or hit in the same breath. The individual has to be very careful, alert and cautious in one’s acts and actions, keep mind awakened while dealing eith employees, subordinates, servants and labour as also followers in politics, religious astivities and trade union leadership. In this behalf, some points are very important, viz.,

Suppose Capricorn and Aquarius are in the 4th and 5th houses or even in 3rd and 4th houses. These positions of Saturn-owned Rasis would prove helpful to Saturn in beneficial functioning for the individual, because ownership of even the 3rd house (inspite of its 6th position from Saturn in 10th house) is beneficial to Saturn’s beneficial functioning in an overall manner. But the positions of Capricorn and Aquarius in the 4th and 5th house would not be very beneficial to the individual through Saturn in the 10th house.

Then suppose, Saturn is lord of 5th and 6th houses, the efect is mutually countermanded, because Saturn’s ownership of the 6th house is beneficial, while of the 5th house is not.

All this is a very delicate matter and should be studied with full attention keeping in mind all related relationships.

Then the question remains of Saturn being lord of the 10th house itself and the 9th or the 11th house in addition. If it is the lord of the 9th house also, it assumes lordship of both, a Kendra and a Trikona and thus even being a hard star, it is beneficial to the individual in its own way. It includes gains from charitable, social, religious organisations, gains from side business (if the individual is in employment), gains from leadership in tradeunion or any other labour or agricultural organisation. It would also include gains from politics, running or managing and industry, placement service, dealing in old or new auto vechicles, dealing in machinery and their spare parts, and all such other lines as are attributable to Saturn.

However in case Saturn is lord of the 10th and the 11th house, it would ensure success as leader of a trade-union, labour or agricultural organisation or in politics or administrative formation. It helps getting selected or elected to a position of power including membership of parliament, senate, any legislature or panchayat or similar public administration formation, higher income than expectation and anticipation by fair and unfair means. At the same time Saturn in 11th house would adversely affect the education and to some extent the general health of progeny, unless the stars of the progeny itself are very strong to countermand the adverse effect of Saturn in the 11th house.

So much emhasis has been given to Saturn’s position in the 10th house, because the 10th house mainly relates to source of livelihood and fair or unfair means of income, as also gains or no gains from the father.

Thus it is clear that as compared to other stars or as compared to Saturn’s position in other houses, it matters considerably, for prediction purposes, which houses in the Birth-chart are owned by Saturn. Saturn is helpful in the house occupied by it (by both fair and unfair means and methods), it is in a way harmful for the house it aspects directly (it being the 4th house), though indirectly it aspects the 11th, 12th, 6th and 7th houses as well.

It means that while occupying the 10th house, it is in a way unfavourable to the 4th house, which rules mother, conveyance or means of transport, middle parts of the body including heart and digestive system, food, property, friends and domestic happiness or unhappiness.

When talking of adoption it is kept in mind that there are growing incidents of newly born babies being abandoned on roads, garbage-bins, at doors of places of worship or orphanages, and therefore it is not necessary that adoption is from relations; it has come to be believed that kids are adopted by any kind of parent (in no way related to the child).

Overlooking this important point would harm the predictive science. In ancient times too, newly born were abandoned by their mothers or others on behalf of the mothers, most glaring examples being those of Kunti and Karna (in the Hindu epic ‘ Mahabharar’ ), or that of ‘Shakuntala’, whose son’s name was Bharat, (wherefrom India derived its name ‘ Bharat-varshi ‘ are enough. Birth-charts of Karna and the beautiful Shakuntala are not known now to anyone. Whatever the position of other stars, it can safely be presumed they had Saturn in the 10th house in a strong position. That Saturn in the 10th house adversely affect the 4th house, which ruled, among other rhings, the natural mother.

If Saturn is in a watery Sign, there are chances that the individual would go oversees for seeking means of livelihood and big fortune in terms of name, fame and money. If Saturn is in a cardinal Sign (Aries, Cancer, Libra or Capricorn), chances are that the individual would move out of the native village. town, city, district, county or state to other place for seeking better means of livelihood.

It could also for any other reason such as to escape legal action for civil or criminal offence or on account of excommunication by caste, community, religion or the local administration etc.

In other words, it can be said that Saturn in. the 10th house, for good or bad, disturbs the individual’s constant and permanent relationship with parents and residence at the native village or town. However it has to be noted that in any planetary influence where another person is involved, it should be borne in mind that the stars of the other person would also adversely or favourably or protectively affect the situation. The stars of the other person or person thus support or countermand the adverse influence of Saturn in the individual’s Birth-chart.

However it is abundantly clear that Saturn’s the 10th house warrants special and concentrated study.

Person, who have Saturn Planet in 10th House with good aspect and placement or lord of 10th  house then he or she can wear Blue Sapphire (Neelam Quality)  Gemstone. click here to view our product This will boost up their administration ability, business skills, successful career and help in business. If Saturn placed with negative aspects then he or she do Mrityunjaya mantra .