All the nine precious gemstones are a very powerful medium. They affect the areas of a native very rapidly. Especially those which are transparent take effect immediately. Thus, any negative energy associated with these gemstones has to be removed before these are worn by the native. These gemstones have their own vibrations which are connected with the colour of the stone and also the connected planet. These stones have to be energised to draw away negative energy from them and to put them into an excited state where they resonate with cosmic energy to give full benefits to the native wearing them. We give below the ritual way of wearing the gemstones. This energising is tedious process and one can ask a learned person to do it for a native. But if the native can recite the Mantra for the Gemstone, then it is best that he himself energies the stone.

Ruby should be worn on a Sunday of bright half (Shukla Paksha) of Moon at the time of Sunrise. Before wearing, the ring has to be washed in unboiled milk and holy water. Then it should be worshipped with incense and flowers and the Mantra for Sun should be recited 7000 times.

After that the ring should be worn on the ring finger. The same procedure should be adopted while wearing a substitute stone for Ruby. Ruby is best when studded snugly in a Gold ring without claws. 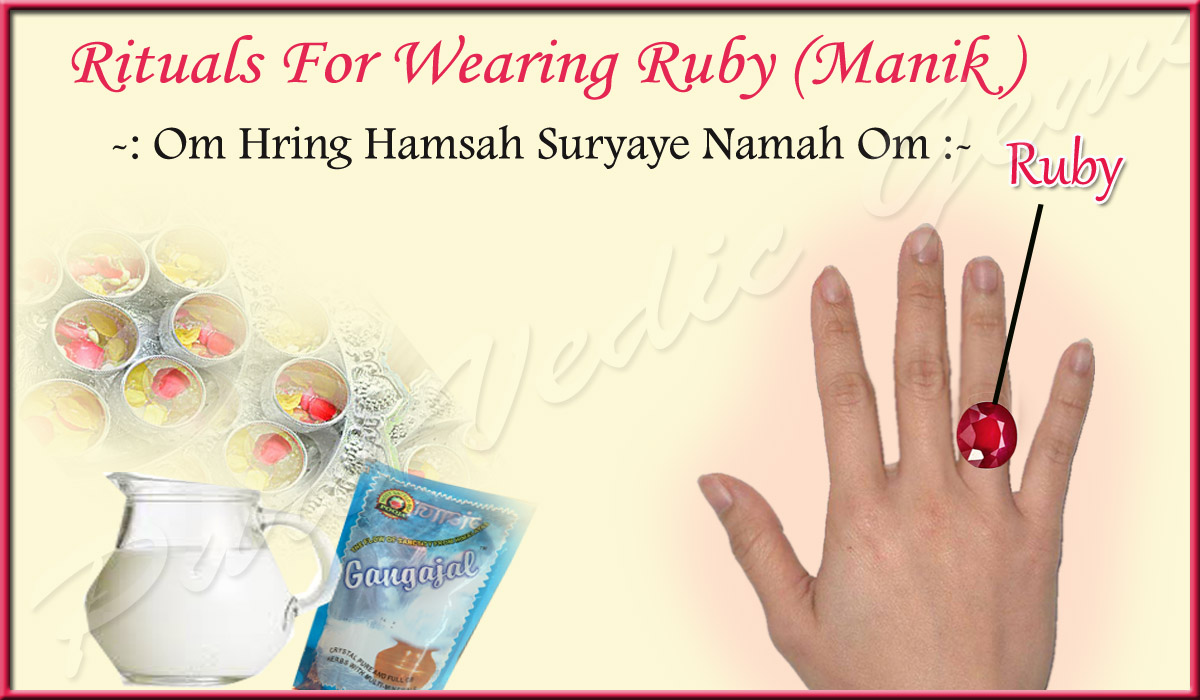 The ring of pearl should be made of Silver and can be worn on Monday of the bright half (Shukla Paksha) of Moon. The process of energising it is same and the mantra for Moon is

The mantra should be recited 11000 times and ring should be worn in the evening in the small finger. The process of energising and worshipping is same for substitute stones for Pearl. 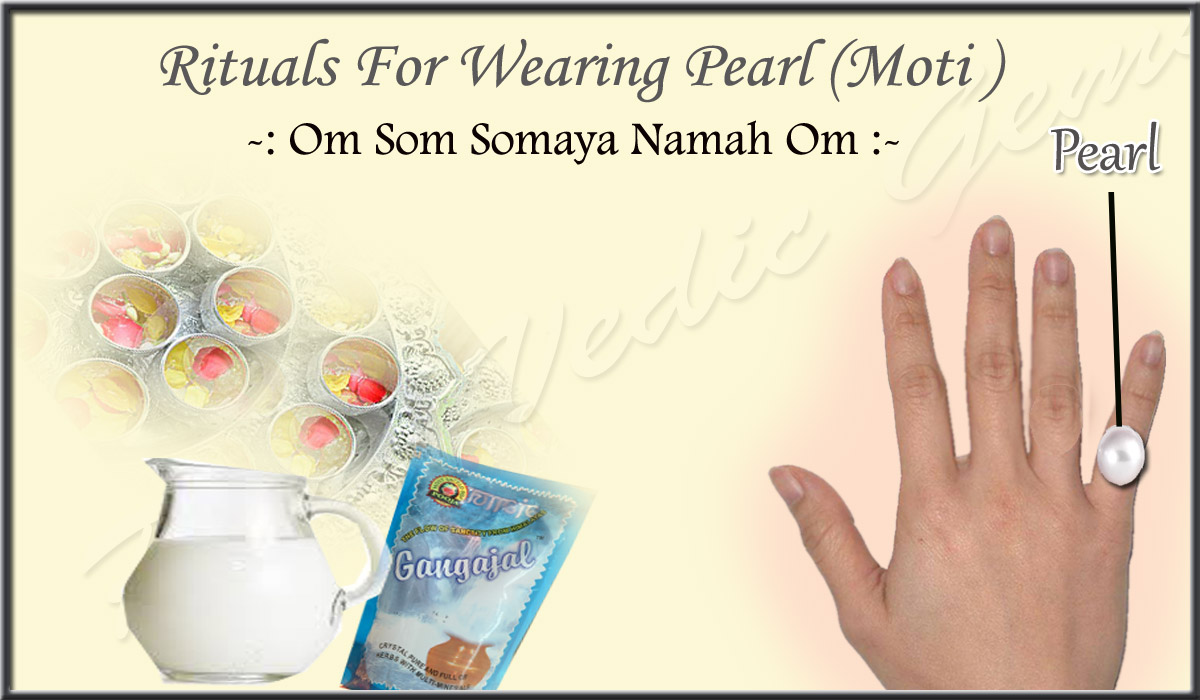 Red Coral is studded in Gold. The ring should be worshipped in the same way and the Mantra for Mars should be recited 10000 times. It should be worn in Shukla Paksha Tuesday one hour after Sunrise. The Mantra is

The process for energising the substitute for Red Coral is same. The ring should be worn in the Ring finger. 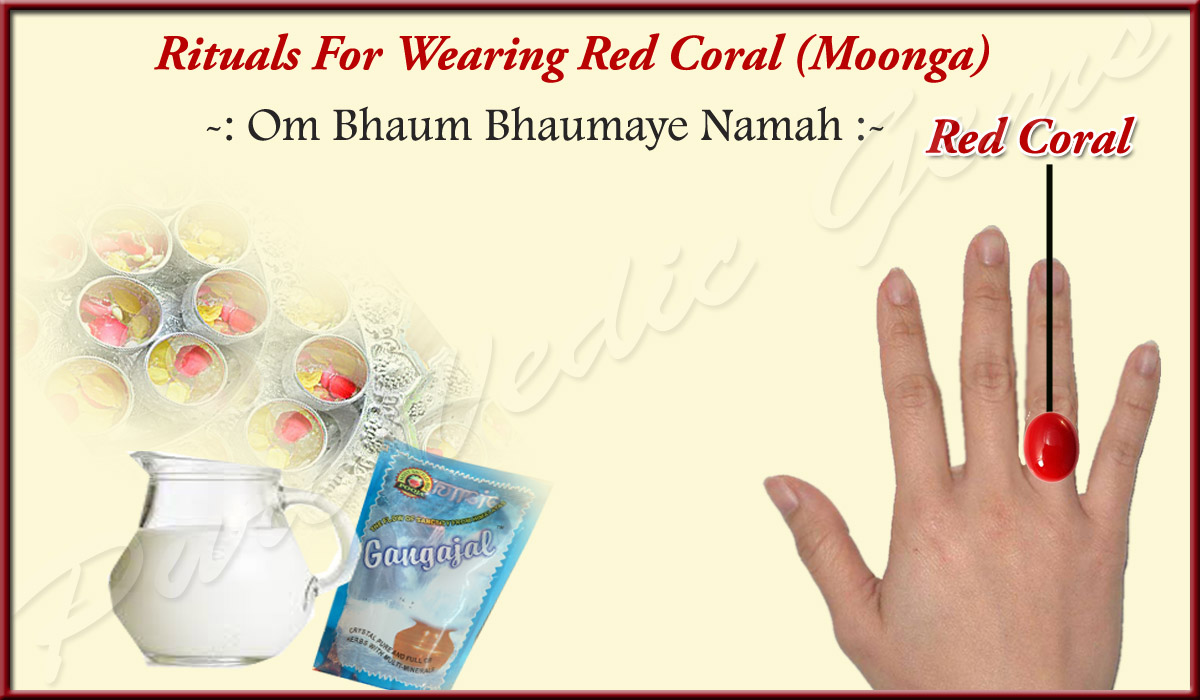 Emerald can be studded in gold as well as Silver. It is worn on Wednesday of Shukla Paksha 2 hours after Sunrise. It should be worn in the Little finger after energising. The Mantra is

This Mantra should be recited 9000 times and ring should be worn after worshipping. The same process is done for substitute stones for Moon as well. 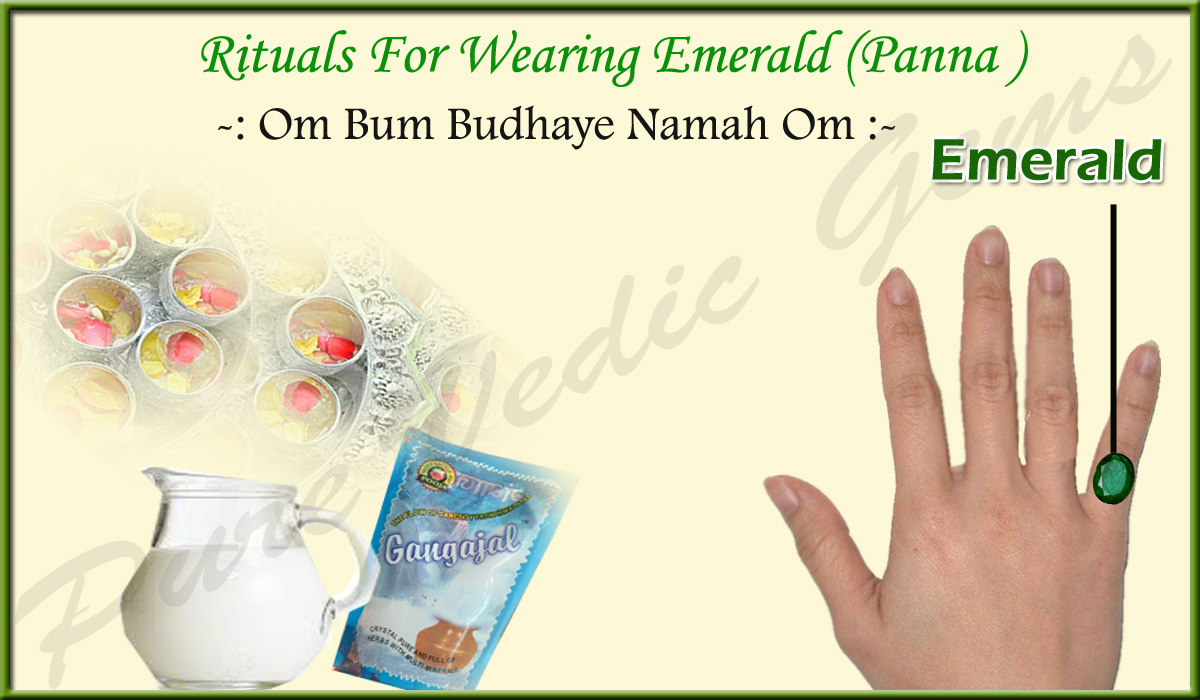 Yellow sapphire has to be studded in Gold. It is worn in Shukla Paksha Thursday. The ring is worn on First finger after energising and worshipping it and is worn one hour before Sunset. The Mantra for Jupiter is 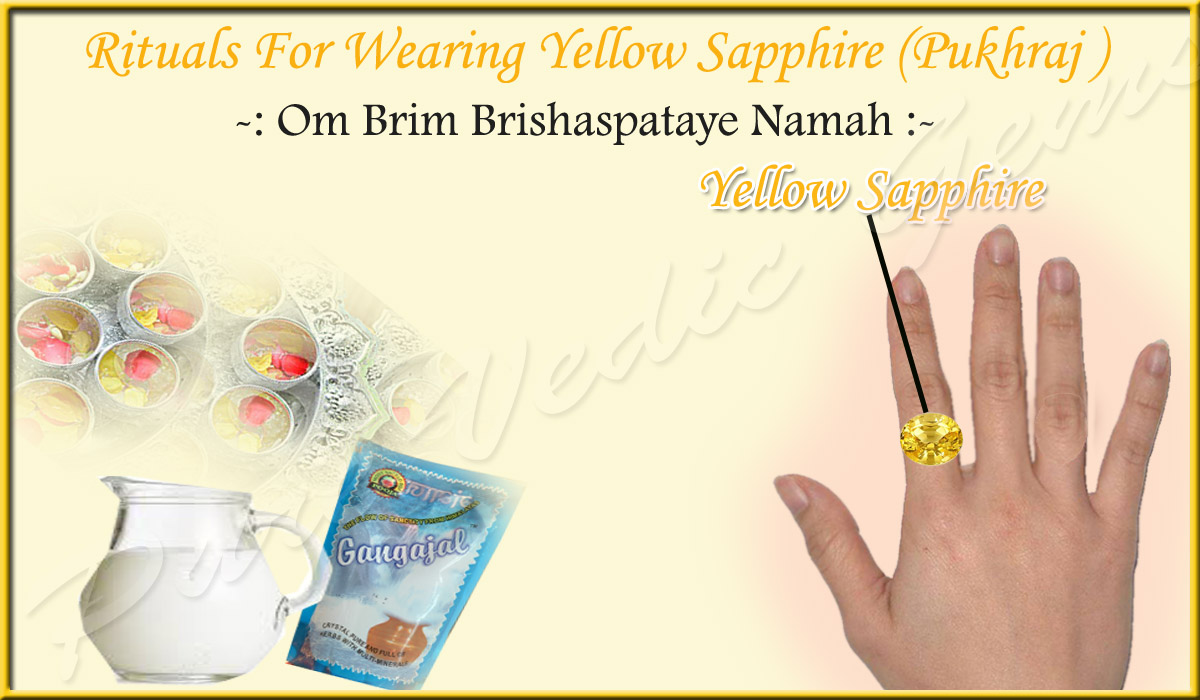 Blue Sapphire ring is best in alloy or Panchdhatu or even Gold. It should be worshipped and energised. It should be worn in the Middle finger on a Saturday of Shukla Paksha 2 hours before Sunset. The Mantra for Saturn is

The Mantra should be recited 23000 times and ring should be worshipped. Same process should be done for substitute stone. 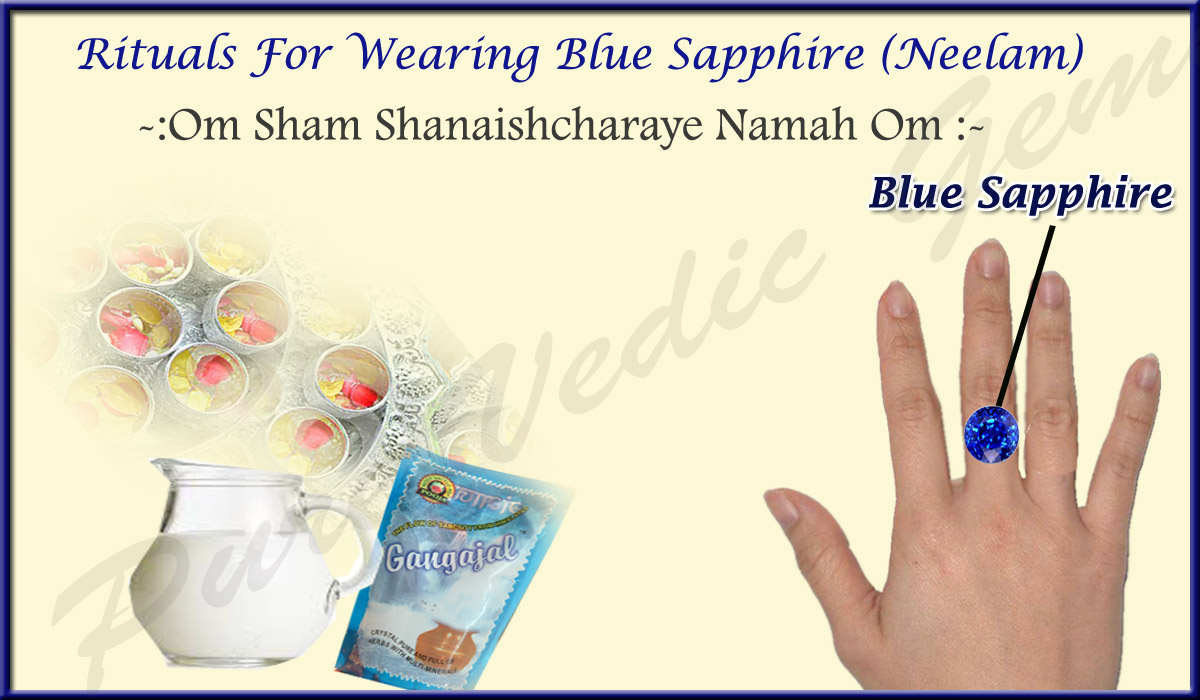 It should be worn in alloy (Ashtadhatu or Steel). Even Silver is very good metal. The ring is worn on a Saturday of Shukla Paksha 2 hours after Sunset. The Mantra for energising the ring is 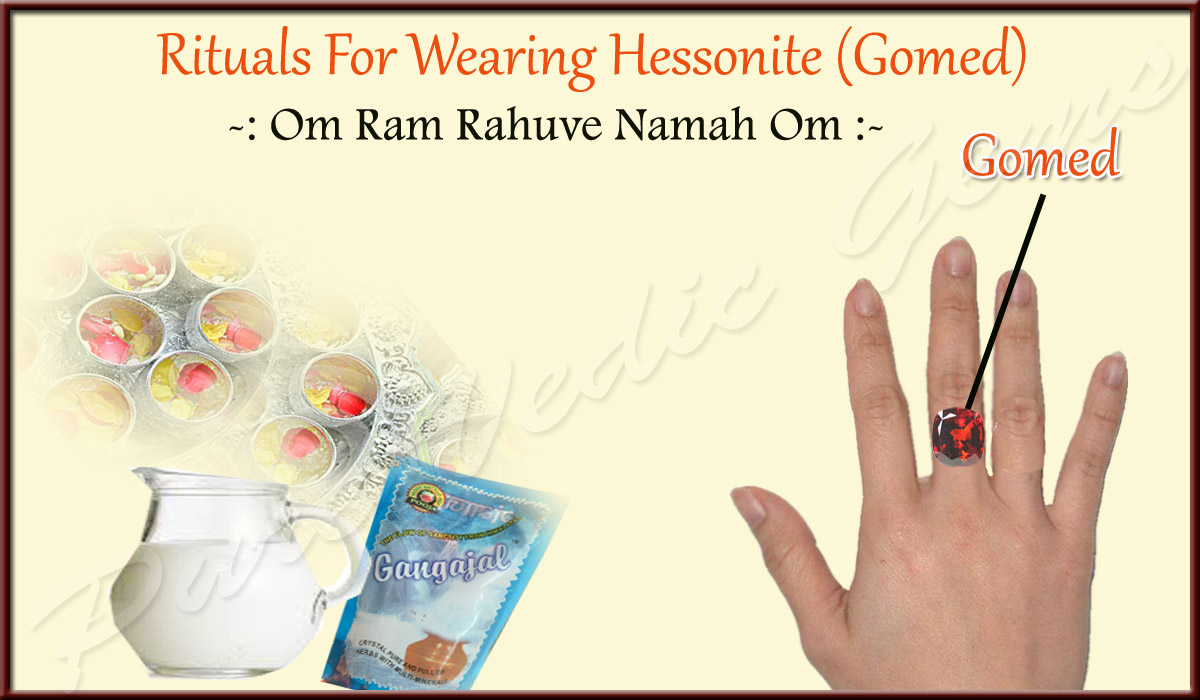 Cat’s eye is best in Silver ring. It should be worn on a Tuesday of Shukla Paksha at Midnight in the ring finger. The Mantra for energising the ring is

The ring should be worshipped by reciting the Mantra 17000 times and for substitute stones also the same process of energising should be adopted. 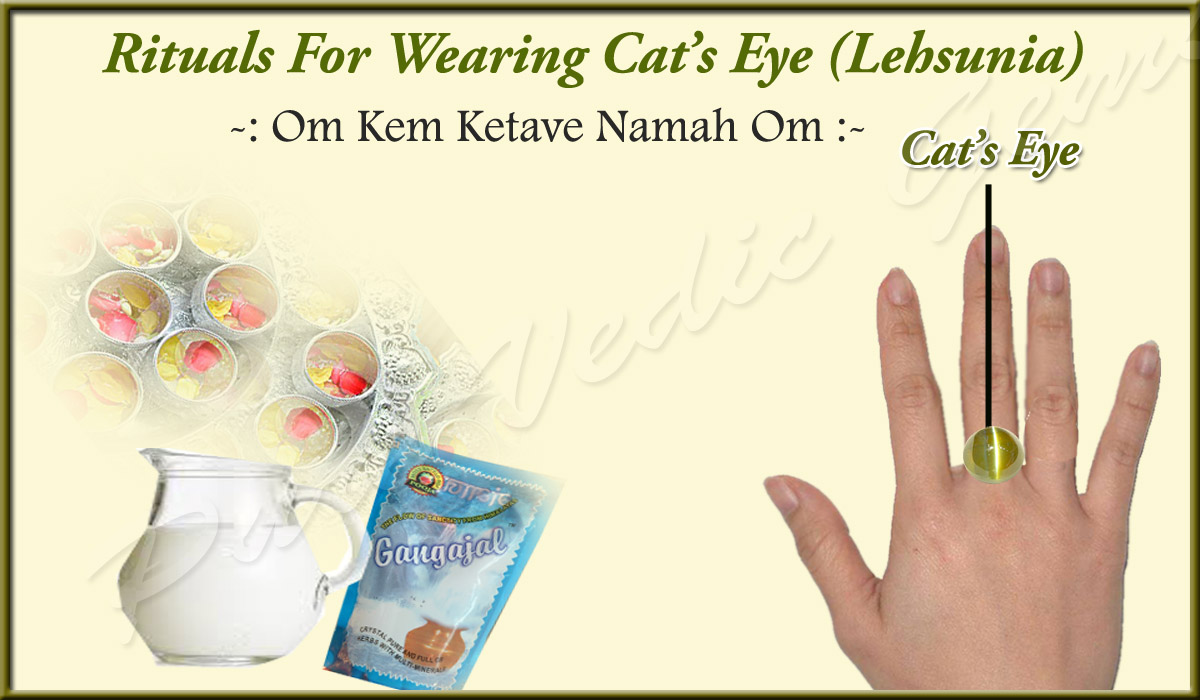 White Sapphire should be worn in Silver or Platinum. It also works well in Gold also. The ring is worn on ring finger on Friday of Shukla Paksha in the early morning. It should be energised by reciting the Mantra

This Mantra should be recited 19000 times and ring should be worshipped before wearing. The same process is carried out for substitute stones as well. 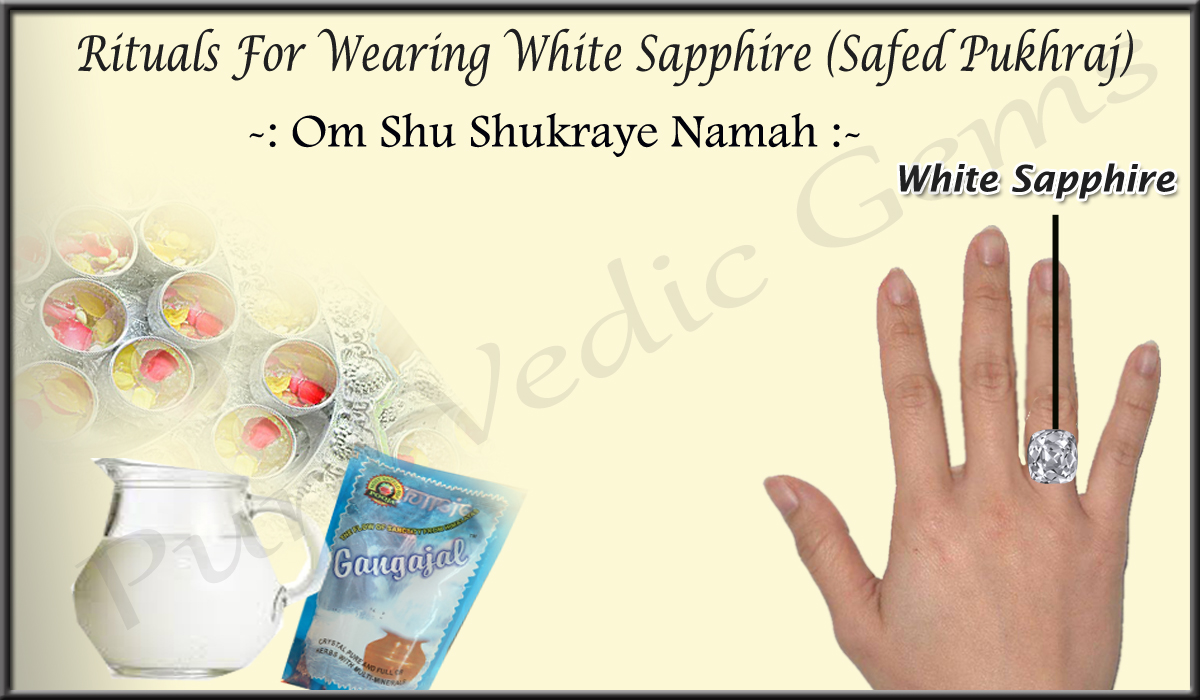