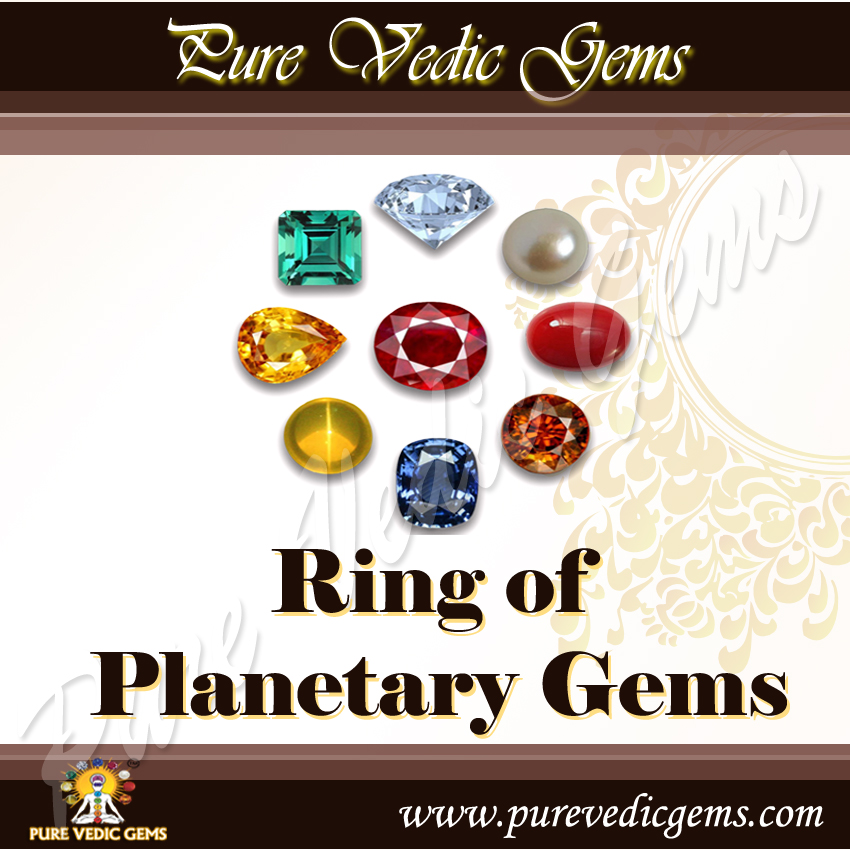 Travellers and tourists visit the jeweller’s showcases at Delhi, Bombay, Colombo, Singapore or Bangkok, to buy the particular much-revered Navratna rings which have a three thousand year old history and so much significance and tradition attached to them.

In the East, the choice and wearing of the correct Birth Stone is not a haphazard affair, but has developed into a fine art. The mystical and therapeutic properties of all the popular gems are general knowledge and universally accepted. An Easterner wears a gem not only because he likes its colour, shape, value, durability or for its rarity, but more so because that particular gem is the one corresponding to his lagna (planet) according to his horoscope and he has faith that the planetary gem would enhance the beneficial qualities of his star and ward off the malefic effects.

To counter the evil influence of a planet that is in power, sages have recommended to wear the planetary gem when the transit of that planet is taking place. It is customary to wear two rings: one for the planet ruling the main period and another for the planet ruling the sub-period. As it would require nine rings in his ‘cupboard’ to wear them in rotation and he would have to keep a watch on the Planetary movements also, a happy medium has been devised. That is to have all the nine stones, representing the nine planets, to be mounted on a single ring so that it could be worn at all times.

In Olden times only Maharajas, Nawabs and wealthy men could afford such luxury. Navratna rings are heirlooms in families for generations. If these rings could talk, they could provide stories and anecdotes of how they have so much luck, protected the owners from so many evils and endowed health and other benefits- short of miracles- to the owners and how zealous were the owners in safeguarding the rings to the point of veneration.

Even today, it is not within the reach of many to own a Navratna ring that conforms to the exact demands of Sastras and the traditions associated with it.

Though Navaratna rings could be bought off a jeweller’s counter, the authentic Navaratna is selected With great care and not only the jeweller but also the astrologer and the priest have a part to play.

Summary of the procedure is as follows: After the stones, which must not have any flaws and of good colour, size and quality, depending on one’s purse are selected; they should be cut, to a uniform, size. According to some authorities, the centre stone representing the planet which would give the owner most trouble should be of half a size bigger than the rest. These stones are then blessed by a priest or in a temple and handed to the goldsmith at an auspicious time. The ring has to be of pure gold and another one or more metals which have planetary significance. Each stone should be set at that particular time, in the correct position when that planet is in session, to a set order of priority. This ritual may take the best part of a year or more. After the ring is completed, it would be handed over to the owner at the propitious time and will be kept in a box wrapped in turmeric soaked silk or cotton— but not wool or skin together with sandalwood or other aromatic roots near the family shrine. It will have to be worn for the first time at the most auspicious hour Muhurta appointed by the astrologer with the appropriate incantations. Apart from other factors, it must always be in the period of the waxing Moon. It is usual also to give a party to celebrate the event and give charity to the poor to attract more merit.

These rings are treasured not so much for their intrinsic worth but to the mystique attached to them and evolve with them, Many are the stories about the roles Navaratna rings have played in the lives of the owners to bring financial luck, cure ailments, succeed in law suits, reconcile husband and wife, win the love of opposite sex, protect from dangers, accidents and misfortunes generally. Instances of people getting into bad times after the Loss of their beloved Navaratna rings are many.

Navaratna ring is an institution among the Hindus as much as bathing in the Ganges, belief in reincarnation and applying ‘pottu’ on the forehead. Navratna has its devotees also in Burma and Siam(Thailand). Navaratna stories are also worn as pendants by the women. They should then touch the body without any dress or other jewellery coming in between.

The Correct planetary stones according to Sastra (Kashyap Smriti) and other classics are:

In Ceylon Singhalese favour Padmaraga (Golden Topaz or Golden Sapphire) in place of Coral; while Hindus sometimes substitute Padmaraga in place of Ruby.

In order to purify and also increase its efficacy, some regularly dip the ring in goat’s milk, turmeric water or saffron water overnight Full Moon night preferably, as there is a belief that their beloved Navratna would look after the owner well to the extent the owner looks after the Navaratns. This also includes in not indulging in drinking, debauchery, gambling and other vices when wearing the ring.

Even off the counter, Navaratna rings have beneficial effects on the wearers though not so pronounced as the authentic custom made ones.

Warning – about wearing the rings made for others. Though these rings with stones of uniform size could be worn safely after they have gone through a process of purification: those rings that have been ‘tailored’ for a particular owner with, one or more stones bigger than the rest should never be worn by another unless the Planetary positions coincide with that of the original owner; which is very remote. The results could be malefic to those whose vibrations are different.