Planets and Their gems Catseye

Planets and Their gems Catseye

Planets and their gems 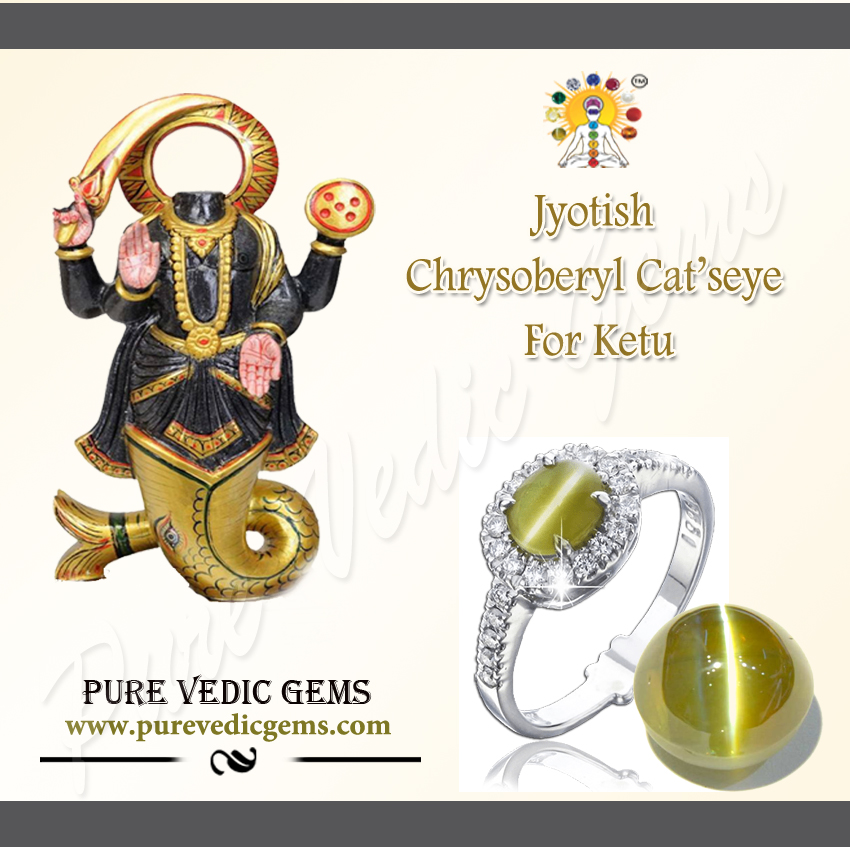 Chrysoberyl Catseye for Ketu, Ketu, like Rahu, is a malefic ‘shadow’ planet, the difference between them being that being that where Rahu may seem to give material boons, Ketu takes them away. Ketu can be a factor in increasing one’s spiritual renunciation and detachment from worldly things. He can act as a great force propelling one toward enlightenment and freedom from identification with corporeal phenomena. Ketu can also increase one’s psychic or clairvoyant abilities or help one to be a great healer.

Ketu afflicts whatever house he is in and causes everything from poverty to imprisonment. There may be emotional distress, great fear and anxiety, or terrible nightmares due to the malefic effects on Ketu. Self-Destructive tendencies, indiscriminate actions, and accidents are not uncommon effects of the negative influence of Ketu. On the physical level he can cause the worst of nerve or muscle disorders, disfiguring skin diseases, paralysis, and incurable diseases such as cancer in its advanced stages.

Chrysoberyl Catseye is the gem utilized to affect Ketu’s influences in a positive way. It may heighten one’s extrasensory perception or sense of finer discrimination in general, especially in regard to bestowing spiritual insights, and may help in healing many diseased conditions of the body as well.

Ketu, like Rahu, owns no signs of his own specifically, but is stronger in some and less harmful in others. Ketu will reduce or destroy the power of planets it is conjunct with, so we must be careful how the chrysoberyl gems is utilized. Here again I usually try to recommend a gem for a planet giving a benefit aspect rather than directly recommending the catseye for Ketu.

Ketu is an enemy to the Sun, Moon, and Mars; Saturn, Mercury, and Venus are friendly; and Jupiter is neutral in relationship to Ketu. As with Rahu, since there is no rulership for Ketu in the zodiac, my recommendations will be for the signs that Ketu is posited in and not for the ascendants and their lords as presented in connection with the other major gems. The same precautions should be taken here as in recommending hessonite for Rahu. Mistakes can be costly in human terms, for just as Rahu can wreak emotional havoc, Ketu can wreak havoc upon the physical body. When called for, we usually suggest utilizing the catseye for limited periods of time, or just during the planetary periods of Ketu.

When Ketu occupies the sign of Aries, the catseye should not be worn. Troubles to the blood or health in general may be enhanced.

If Ketu is in Taurus he is said to be debilitated, so here especially it is preferable to strengthen the aspects of a benefic planet with another gem rather than use the catseye, which may make the affliction worse. The chrysoberyl may be used in some cases, but if there is any uncertainty then it should not be recommended.

In Gemini Ketu is also said by some to be weak in strength. So difficult is this placement that some astrologers consider this to be the actual sign of debilitation. It may be easier to make a recommendation for this placement than the previous one, but we need to beware of nervous or mental disorders which may be heightened.

When Ketu is posited in Cancer wearing the catseye may cause diseases of the joints to become excruciatingly painful, and there is a plethora of other nefarious possibilities to be considered. The catseye should not be worn.

Ketu in Leo is another placement which is not to be strengthened under any circumstances. Skin diseases and the chance of unfortunate accidents may increase, so here again the catseye is not to be worn.

When Ketu is in Virgo there may be some benefits in wearing the catseye. It can heighten intuitive perception and offer protection against disease.

When Ketu is in Libra the catseye may possibly be used to alleviate ‘wind’ diseases and may be considered for counteracting other difficulties.

Ketu’s placement in Scorpio, although in an enemy’s sign, is considered to be exalted. Therefore the catseye may used for one’s benefit during the dasha or bhuktis of Ketu.

If Ketu is in Sagittarius the catseye may be a viable option for treating diseases of the skin. It may also heighten One’s clairvoyant perception or increase one’s spiritual aspirations.

Ketu posited in Capricorn also leaves room for recommendation of the catseye. It can help in relieving nerve pain and increase one’s power of intuition.

If Ketu is in Aquarius it is also possible to wear a catseye. It may help one to win in games of chance or provide one with protection while traveling. It may also be utilized to remedy certain physical illnesses.

When Ketu is in Pisces wearing a catseye may greatly increase one’s psychic ability and spiritual dedication. It may help in curing certain diseases affecting the physical body, especially the hands and feet.

If Ketu tenants the 1st house, wearing a catseye is generally not recommended. Doing so usually causes mental instability and suffering within relationships.

When Ketu is in the 2nd house catseye should not be worn. It will weaken the eyesight, negatively affect one’s dietary habits, and reduce harmony in family dealings. It certainly won’t help one’s earning capability, either.

If Ketu tenants the 3rd house wearing a catseye may increase one’s competitive ability and mental focus. It is one at the better positions for Ketu where wearing the chrysoberyl may bring positive effects.

When Ketu is in the 4th house wearing a cat’s eye may easily cause loss of land or property and descent in one’s professional standing or career. It may also create health problems in the chest area, and so should certainly not be recommended.

When Ketu is in the 5th house wearing of the chrysoberyl is again not a wise choice, as it may have negative effects on a person’s emotions or cause anxiety attacks. It can also bring about losses through investments or make one feel that he or she is unable to ‘cope’ in social situations.

When Ketu tenants the 6th house wearing the catseye may increase one’s strength and social position. it can increase one’s determination and help propel one toward desired gains.

If Ketu is in the 7th house wearing a catseye is unwise. Marital discord may become worse, and intestinal or colon problems may also be exacerbated.

When Ketu is placed in the 8th house wearing a catseye can be extremely dangerous. It may cause damage to the intestines or colon as well as to the sexual organs. It may bring accidents or problematic encounters with criminals and even propel the wearer himself in unlawful or unwholesome directions, and therefore it should not be worn.

If Ketu is in the 9th house there may be benefits from wearing the catseye gems. It may be helpful in dealings with authority figures, and there may also be a positive effect in regard to enhancing one’s spiritual practices or charitable endeavors.

For Ketu in the 10th house position it is generally not recommended to wear a cat’s-eye. It may cause the tarnishing of one’s name or reputation and produce delays in gaining the fruits of one’s actions.

Ketu in the 11th house is a placement where many benefits may be gained through wearing the catseye. It would be especially helpful for those in positions of power or for those working for charities or religious organizations. Spiritual or clairvoyant powers would also be favorably enhanced.

If Ketu tenants the 12th house it is generally unwise to wear a catseye. It may create losses in business or in relationships, and can also cause insomnia or nightmares. There can be little benefit in attempting to strengthen this planetary position.