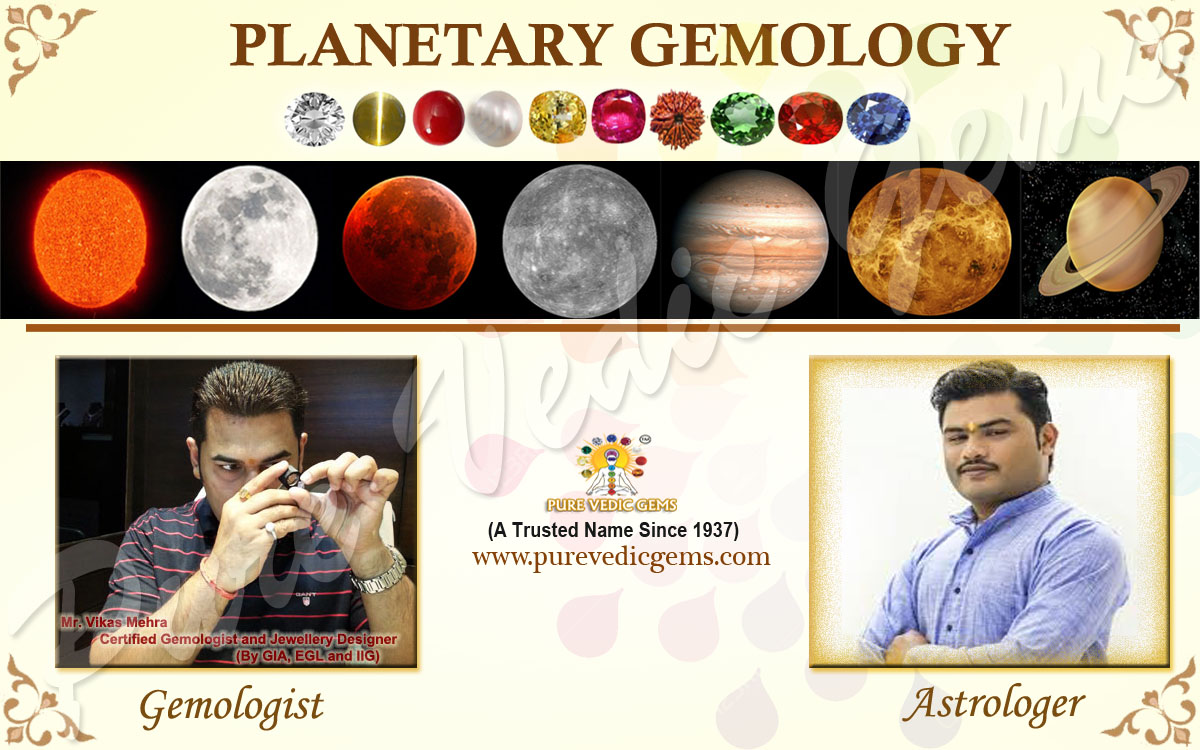 The science of Planetary Gemology is one which has been used in accordance with astrology for thousands of years. It is the science of understanding how gems transmit and reflect planetary rays, and how they will increase planetary influences in a person’s life. Gems never ‘decrease’ a planet’s energy or its cosmic rays. There is a school of thought wherein some astrologers posit that wearing a gem for a planet which causes suffering due to unfortunate positioning at the time of a person’s birth will ‘propitiate’ that planet or cause it to give less trouble. Extensive experience in this field, however, has proven this idea to be a misconception. Therefore the recommendation of any gem must be given a great deal of concentrated thought by the astrologer in order to determine whether a gem will truly have a positive effect on someone. Mistakes can be costly if malefic cosmic rays are unintentionally increased. Therefore it is only sensible that a conscientious astrologer who recommends gems to his or her clients will carefully study the science of planetary gemology in order to correctly prescribe gems.

The first consideration is the inherent ‘strength’ of a planet. First, it is determined how the planet fares in the Zodiac sign and house which it occupies. If it is already very strong, then there may be no need for the gems to be worn.

One of the first factors which an astrologer considers is the ‘houses’ that a planet owns in the horoscope. According to the ascendant or rising sign, houses are considered benefic or malefic.

Planets are strongest in their signs of exaltation, then in their own signs, and then in signs of ‘friends’ in descending order. They are considered neither strong nor weak in signs neutral to them. They are weakened or their positive attribute may be curtailed by being in an ‘enemy’s’ sign, and they are greatly impeded in their potencies when in their signs of debilitation. When a planet is thus weakened so that it cannot adequately distribute its rays, remedial measures are called for, yet the therapist must be especially careful when recommending gems for naturally malefic planets or for rulers of the 6th, 8th, and 12th houses, as these have the greatest ability to cause adverse effects.

The Sun, Mars, Saturn, Rahu, and Ketu are considered natural malefic planets. Care must be exercised in recommending their gems cannot be overstated due to the ability of those planets to cause stress within the body or mind, to increase the chances of accidents, and to expand their power to cause suffering. The natural benefics are the Moon, Mercury, Jupiter, and Venus, and their gems are likely to cause malefic effects, but there are other considerations to take into account.

The optimal approach is to look at all the pros and cons of wearing each gem in accordance with the horoscope of each individual person, and then make a decision based on his or her specific needs and desires. There is no blanket rule like “Mars is debilitated so wear Red Coral”, or “Jupiter is ineffective by being defeated in a planetary war so wear a Yellow Sapphire”. Just as the astrological science is so complex that as one find that certain rules may be overshadowed by other considerations, the same is true to utilizing planetary gemology.

One important and very practical piece of advice which could be offered to any practicing planetary Gemologist is that he or she try to recommend gems which a person can wear throughout most of his or her life.

Another good rule of thumb is that one try to purchase the best possible quality gemstone that one can reasonably afford, even though it may seem like a fairly large sum of money. The gem will never lose its beauty, potency, or monetary value, and will be beneficial for as long as the person wears it. If it is determined that the gem will indeed be beneficial for the major portion of one’s life, then the actual monetary cost becomes less of a consideration in relationship to the benefit derived.