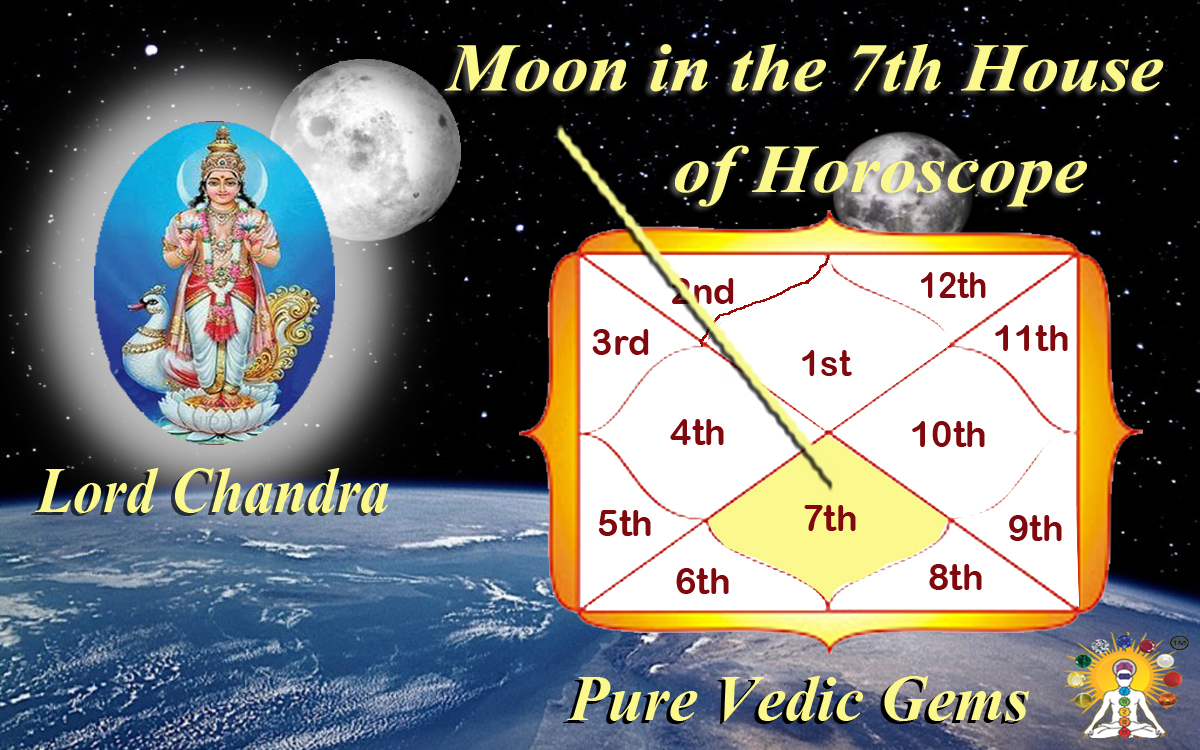 This is one of the most favorable positions of Moon, be in waxing or waning position. Moon is very important in the 7th house because this house relates to lover/ beloved or the spouse as such. Other soft stars in 7th house can give qualities like education, the maturity of mind, beauty or charming personality to the spouse, but Moon alone can get the individual a spouse with the cordiality of mind and thought, with very good mutual understanding. Disagreements are not ruled out, but no serious quarrel or fight. Disagreement ultimately ends, on the elucidation of the disputed matter in fresh -mutual understanding or appreciation for the viewpoint of each other is restored in full.

If Venus is also in a Kendra or trikona or even in the 11th house, Moon is able to give ample mental and physical satisfaction to each other in the bedroom, besides giving beauty, charm, and pleasantness or present ability to the personality of the spouse. No doubt Moon gives an understanding of and feeling or need for companionship of the opposite sex at an early age, sometimes even at an immature physical growth or unripe age for the purpose.

Where complexion is concerned, firstly its concept carries a relative sense in it; secondly, it depends on the parentage as well as on the climate of the region of birth and growth in childhood.

Thirdly it depends also (a) on the Rasi in the 7th house, (b) its lord, (c) placement of that lord in the birth-chart and (d) its relationship with the 7th house, and with Moon situated there. Fourthly it depends to an extent on other planets occupying the 7th house in close vicinity of or at a distant degree from Moon. And the last point relates to the planet ruling the ‘kaaraka’ for the spouse at the time of the birth of the individual.

It would be better to give an example. Both, mother and father of Maharani Sanyogitabai Holkar,(wife of Maharaja Yeshwant Rao Holkar of the then Indore State, the largest in Malwa Region) had a bright dark complexion. But the stars of Maharani Sanyogitabai Holkar were very favorable for extra-ordinarily fair complexion, and she really had it. Maharani Sanyogitabai Holkar expired sometime in the 1940s. People of Indore recall even now, several decades later, that she had such extraordinarily translucent and fair complexion that when she chewed a betel-leaf its movement down the throat could be observed by the people sitting with her.
Betel leaf is a unique item in India, which is packed with several condiments, and which on chewing gives out a fragrant smell to the mouth and red color to the lips, perhaps better than modern lipsticks!

This point has been discussed in great length because whether a boy or girl (even parents thereof) always or often judge the suitability of the matrimonial match on basis of the complexion, and then other qualities, qualifications, and virtues are taken into consideration. No doubt greedy parents first judge the monetary value of the matrimonial match and her or his family.

Saturn or Rahu in the 7th house would give a noticeable difference between the age of the husband and wife. Sun or Mars in the 7th house would give a touch of short temper in nature to a husband or wife, and also a noticeable difference in the height of the two. Sometimes, though rarely only, if the individual has Saturn or Ketu in the 1st house and Moon with Mercury in the 7′ th house, the spouse might have a quick grasp and higher educational qualifications as compared to the other partner in marriage.
Jupiter with Moon in the 7th house would give sharp memory, the maturity of mind and quick appreciation to the spouse. Venus (with Moon), or in the 1st house, or in any Kendra or Trikona, would grant medical qualification to the spouse, she or he may even be practicing in the medical profession. Otherwise, the spouse would be an expert in any branch of the fine arts, including music, painting, dancing, acting, or any concrete connection with film line. It is also likely that if Venus is in the 7th house with Moon, the spouse (wife or husband) might be an expert in gynecology.

A concern of the 7th house is not with marriage and married life alone. Other important matters are also concerned with the 7th house. Thus it has to be remembered that the 7th house very much concerns with quarrels, fighting, buying and selling, litigation, to some extent prosecution or a criminal charge against the individual. Moon alone is unable to grant victory to the individual in case of a fight or litigation etc. It often needs the help of other planets. Mercury’s help would generate useful application of mind, brains, experience, and education. Jupiter’s help to Moon would give use of own knowledge, besides experience and pleadings of the lawyer on own side. Sun’s help to Moon brings in the use of influence or interference of persons in power or authority to the advantage of the individual. The help of Mars and Saturn would bring rescue to the individual by use of threats and use of recourses, friends and physical strength or manpower. Though Rahu is normally unhelpful to Moon, but in the present context, Rahu’s help to Moon in the 7th house would bring in use of tricks and cunningness, while Venus would bring relief to the individual by recourse to wine, physical charm, through supply of casual friendship with a member of the opposite sex, especially in case of men, or use of music, dance, and providing a chance of appearance on vision screen.

In brief, the point is that for ensuring victory or upper hand in any quarrel, fight or litigation Moon will need the support of some other planet as such. In so far as differences between husband and wife or physical separation or judicial separation or divorce by mutual consent or legal contest is concerned, it would be discussed in the following paragraphs with relation to Moon’s combination with other stars. Similarly, complaints of health-related to procreational parts of the body would also be discussed in the course of discussing Moon’s combination with each of the other planets. Moon alone in the 7th house normally does not lead to any of these minus points in life.

Person, who have Moon Planet in seventh House with good aspect and placement or lord of 7th house then he or she can wear Pearl Gemstone. This will boost up their administration ability, business skills, successful career and help in business. If Moon placed with negative aspects then he or she do Rudrabhishek