Mercury in the 7th House of Horoscope

Mercury in the 7th House of Horoscope 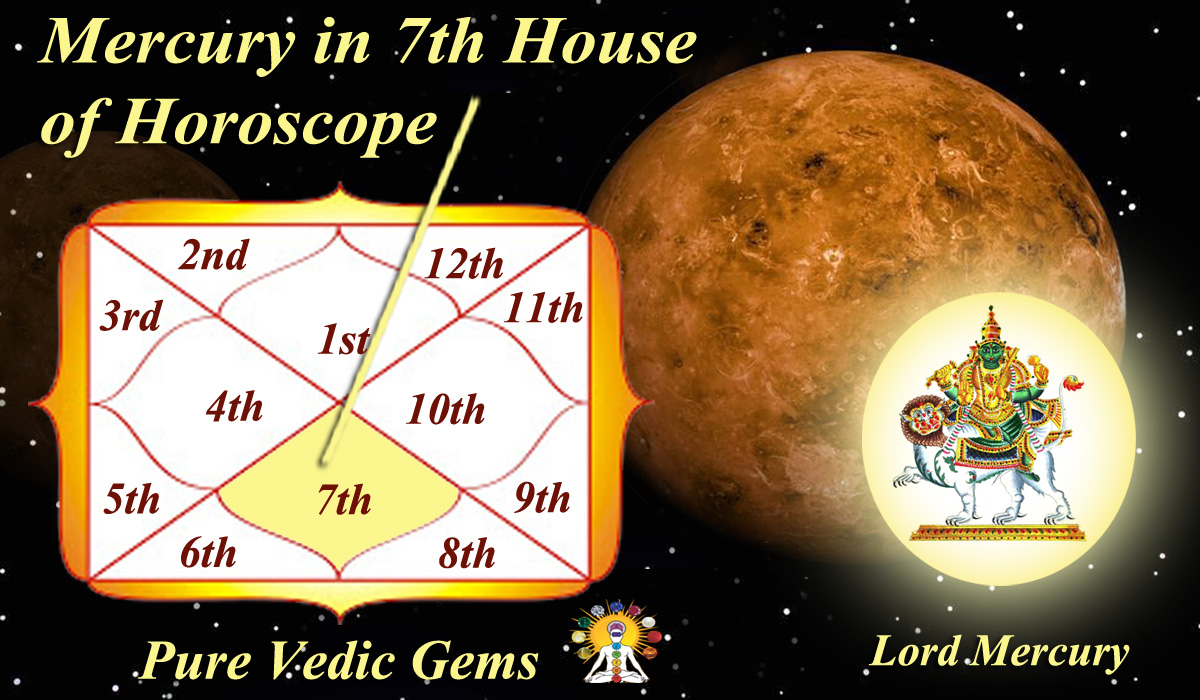 Benefits of Mercury in 7th House of Horoscope :

It is one of the best positions for Mercury. We already know that the 7th house rules marriage, married life, opposite sex partner in life.

The 7th house concerns many other elements to have been detailed earlier. The subjects concerning the 7th house chiefly concern love affair, and the beloved or the lover, sexual tendency and sexual capacity or lack of sexual capacity (partial and complete, curable or incurable). The 7th house also concerns buying and selling, confrontation, quarrel, fight, settlement in a foreign land, wound or injury at the hands of or at the instance of competitor, opponent, adversary, and enemy.

The success or failure of a marriage (failure includes separation by circumstances, separation because of maladjustment, divorce, death, due to a third person angle in the married life or due to character-angle of the spouse) are ruled by 7th house. Similarly, lower abdomen, genital area (and any injury to it or any defect or deficiency thereof), sex-related diseases are the domain of the 7th house. Also, encouraging the spouse towards immorality for any kind for personal benefit, or because deficiency in self, marriage of convenience, contract marriage for a fixed period, taking a mistress or paramour, spouse encouraging or leading the marriage partner towards illegal sexual relations with others are other subjects of the 7th house.

Further litigation, natural or developed tendency towards illegal activity, criminal tendency are also ruled by the 7th house. This enumeration of subjects under the fold of the 7th house is repeated for sake of immediate attention and to serve as a reminder.

When Mercury is alone in the 7th house, it normally gives normally good and beneficial results. Mercury could give, in rare cases, harmful results when any planet has direct drishti on Mercury from the 12th house.

The only bad effect of Mercury in 7th house is that if it is in a Rasi owned by Mars or Saturn (and sometimes the one owned by Sun too), it gives the individual a tendency to blackmail others by writing anonymous letters. Mercury does this to harm a person, or even to favour of a person. The individual might indulge in making bogus-telephone calls, or sending mischievous message on e-mail. If a woman has Cancer in the 7th house (apart from the Rasis mentioned above), she might indulge in some type of blackmail for one reason or the other.

Normally, Mercury in the 7th house gives a person an educated life partner or a friend of the opposite sex. If the partner is not educated, she or he would be intelligent, worldly wise and would have or develop very good understanding of human nature.

The spouse might be a writer, poet, journalist, astrologer or palmist or in any other profession or career mentioned under Mercury’s attributes.