Mercury in the 6th House of Horoscope

Mercury in the 6th House of Horoscope 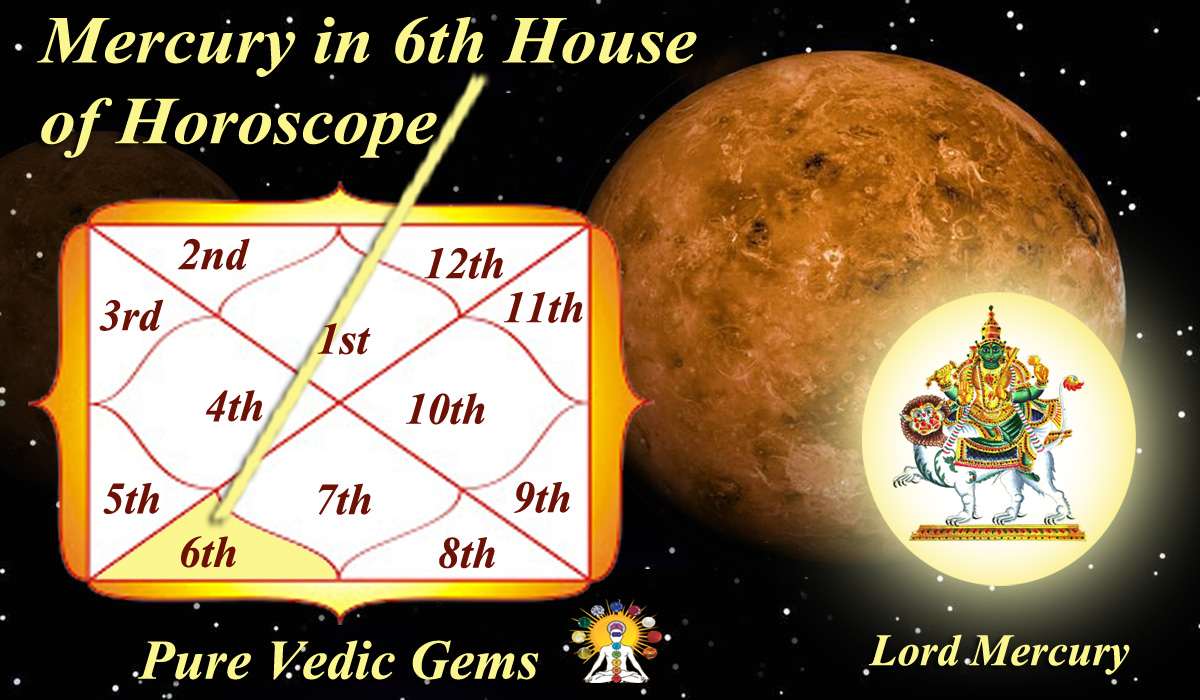 Benefits of Mercury in 6th House of Horoscope :

In dealing with influence of Mercury in any house, remember that mercury is an innocent, non-harming planet. It doesn’t indulge in any harmful activity, at the most it helps blackmail, forgery, and threats by spoken and written word.

In ancient times, there was a saying that an educated enemy is better than a foolish friend. This saying applies in its totality to the effect of Mercury in the 6th house. This house rules mainly enemies, opponents, adversaries, competitors, also illnesses and diseases.

In so far as illness is concerned, Mercury in the 6th house adversely affects the intelligence, wisdom, thinking faculties of an individual. And if Mercury in the 6 house has the association of Moon in the 6, 8th or the 12th house from the Ascendant, mercury can help Moon in causing touch of fickle-mindedness, indecisiveness and a not-so sharp memory.

If Moon is extra harmful being in waning trend or under pressure of hard planets, then this association between Mercury and Moon might lead the individual to partial insanity. Full insanity would depend upon Navamsha, and Saptansha charts too, as also family history for the last at least three generations of ancestors, or physical or sexual association with an insane person for quite some time. It has been observed that in case of partial or complete insanity or loss of memory by any accident, hard beatings, illness caused by association between Mercury and Moon, the remedy for recovery lies in medical treatment. Religious and spiritual remedy should be undertaken first for Moon and then, when signs of recovery start appearing in the individual, similar remedy should be undertaken for Mercury too, along with that of Moon.

Mercury does not cause death, even if brain haemorrhage has taken place for any reason whatsoever. Mercury helps the cause of an individual slipping into coma, but if other stars responsible or capable of causing death are not interfering, it might be hoped that the patient would fully or partially recover from the state of coma. Mercury is responsible to a certain extent for eccentricity or delirium before actual death, but even then Mercury doesn’t cause the death.

Then comes the question of education, studies, and students. Firstly, the students do not pay enough and un-diverted attention to their studies. They are not hard working; do not attend to their homework or written work-fully and properly; depend more on copying from the work of other students. When they take resort to copying and other unfair means in the examination, they get caught, and get punished also, unless they have background support of money or influence.

Mercury in 6th house is capable of giving differences of opinion with mother’s paternal family, and if Mercury is in Pisces, Taurus, Leo, or Aquarius, the differences might lead to actual enmity. If Mercury happens to be lord of the 3rd or the 12th house, the maternal family might cause loss of ancestral assets of the individual.

Mercury is lord of written word too, which means that the individual takes extra interest in preparation of petitions, writs, appeals, representations, applications, statements for others or on behalf of self or spouse, required for submission before any court, legal-forum, taxation-authority, police or investigating agency etc. The individual might introduce considerable falsehood or bitterness in such written word; indulge even in forgery knowingly and intentionally And if the individual loses his or her plea, it is taken as a big defeat and loss of face. In rare cases, the defeated individual takes resort to Writing anonymous letters with false or true allegations against the person responsible for his or her defeat or failure.

These individuals have faith in spiritual powers and influences and troubles caused by them, with the result that they either take resort to mantra, yantra and tantra themselves, or go to such experts or quacks who claim efficiency in such matters etc. Further, these individuals are sometimes highbrow and consider themselves as master of all knowledge and take resort to mantra, tantra etc. without introduction to it by a ‘guru’ (a teacher and a practical guide combined), which tendency quite often ends in harm to them. It is often so in any ‘upasana’ (religious remedy) related to Goddess Durga or Bhairava or any Yakshini. Unfortunately, these individuals think that all the knowledge is given in the books and therefore there is no need for a ‘guru’, which is not a correct.

Another weak point of persons with Mercury in 6th house is that they are not prompt and regular in keeping accounts. for self as well as for their business, venture, self employment; even when they are employed on accounts-keeping, often they try to manufacture accounts from memory, and mistakes creep in, damaging the system.