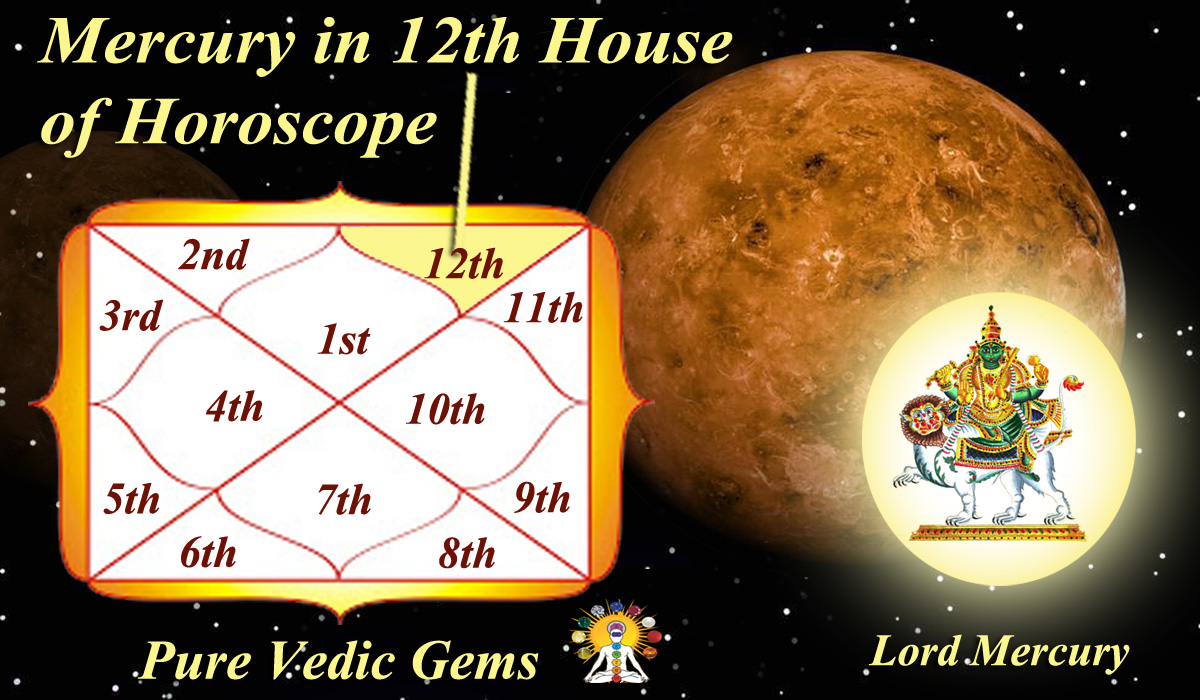 Benefits of Mercury in 12th House of Horoscope :

Firstly, the 12th house relates to spendings, losses, trouble with govt agencies, penalty, punishment, disputes within the family, problems regarding to children or with children or from children. Secondly —problems, trouble, harassment, torture an/or losses may be given by enemies, opponents, adversaries, because Mercury has direct and full drishti on the 6th house. The 5th house relating to children, and also to education of the individual is adversely affected because of Mercury occupying the 8th position from the 5th house.

The preliminary disadvantage caused to the individual about education. The individual is either poor in grasp when anything is taught or needs repetition of teaching. Problem of below standard intelligence could also be there. In some cases it could be lack of educational facilities specially for higher studies, and last of all, there could be financial paucity for primary, secondary or higher education or lack of facilities of such education as is desired for the individual. For example, in the 1920’s, 30’s and 40’s, there were no facilities for learning any science subjects in any high school in four or five princely states of upper Central India and Lower Rajputana within a radius of 70 miles (112 km). As a result, there was no student from that region in those years from engineering or medical or any other education with science as the basis.

Then comes the question of keeping of accounts if the individual is in own business or associated with any kind of account work of business run by employers. The individual is neither prompt nor regular in jotting down accounts as soon as any transaction in cash or goods take place; the tendency is to note down the accounts later on by memory, and thus there remains scope for mistakes and lapses.

The third question coming up is about the education of the children, and the same problems might be there which have been discussed in the preceding paragraphs relating to the education of the individual. In modern times, it is a misfortune for the children as well as the parents, if the progeny, (even one of them), remains uneducated or less educated. This or other causes often lead to differences between the progeny and the parents. And if hard or cruel stars get associated with the 12th house and Mercury is no doubt therein, these differences take the shape of a dispute.

The fourth question is about dispute, trouble, problems that might be created by mistakes, lapses, fraud, forgery in matters of documents, deeds, any kind of important papers, oral and written statements. Another source of worry or problem for the individual could be any evidence he or she might have given, against which a charge of perjury has cropped up.

Then comes the question of piracy of written or published works of others, wrong oral or written commitments, wrong reporting in journalism, critical or defamatory editorials of articles in print media, and biased criticism of books and other material in print media. Disputes related to royalty, using false documents in support of individual’s case or in contradiction of the opposite party’s case, and all other similar subjects too fall within the domain of Mercury in the 12th house.

Mistakes in drafting legal documents also crop up owing to Mercury in the 12th house, and the individual’s has to indirectly suffer the consequences.

Mistakes in filling of any kind of taxation returns or nomination papers for any election also fall within the control-arena of Mercury in the 12th house. Naturally, the consequences follow bringing disadvantage to the individual.

Problems cropping from spoken or written word or withholding written or spoken word at the right moment or opportunity are also Consequences caused by Mercury in the 12th house, and this aspect ultimately gives rise to enmity, confrontation, conflict, opposition, dispute and sometimes legal action too.

It is always better to have detailed examination of Mercury’s position in the 12th house on the basis of the Bhava-Chalitam (i.e. chart of fixation of planetary positions in the twelve houses). And Navamsha, and in addition Trinshansha-chart in the case of females need to be examined as soon in childhood as possible. If Mercury is found harmful in both Bhava-Chalitam and Navamsha/ Trinshansha, remedial steps should be suggested as and when considered necessary by the astrologer examining the horoscope. It may be noted that Mercury’s bad influence is always remediable, the only question being that of the astrologer’s expertise in suggesting the remedy and the client’s seriousness, promptness and regularity in implementing the suggested remedy.