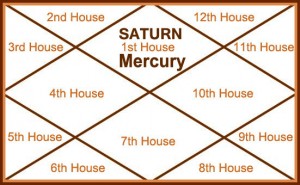 The individual with Mercury and Saturn combination in the 1st house are intellectually obstinate, and they know how to convince others with their analysis, elucidation and arguments.

Physically they are not strong built, but they have such strong willpower that makes them bold and daring to pick up a fight with persons stronger to them. They do not take their defeat easily, nor do they forget it. They are revengeful, though not to the extent of hurting below the belt. They are always open to pardon a wrong done to them, but do not easily pardon a wrong done to women or to helpless or destitute people. They are honest to their duty, responsibility and conscience; generally honest in money dealings too, but become difficult when anyone tries to be dishonest with them.

They take to writing late in life, but when they do write they are very much correct to the point and stick to the core of their subject. They are not given to flattery.

They are honest critics and often suffer consequences of their honesty. They have parental care and affection for subordinates, but they are hard-task masters at the same time. They come in contact with all categories of people ;

from poorest among the poor, and richest among the rich, most powerful and authoritative people; but they neither misuse their contacts no bag about them no allow themselves to be misused by such high-class contacts.

They generally keep away from any civic offence or severe or simple type of crime.  But at the same time they prove to be efficient information gathers, investigators and invigilators. They neither use unfair means to achieve any desired result, nor extend support to anyone using unfair means.

These persons are rather individualistic in nature, a friend to all but intimate with none. They talk a lot but rarely give out their inner secrets, whether official or private.

They have often to struggle for their education, and quite often they have to manage it themselves by self-help.

Such persons often start their career by service, and there too they have to struggle hard for promotion, risk in rank, full emoluments etc.
For more…. https://www.purevedicgems.com/about-vedic-astrology/