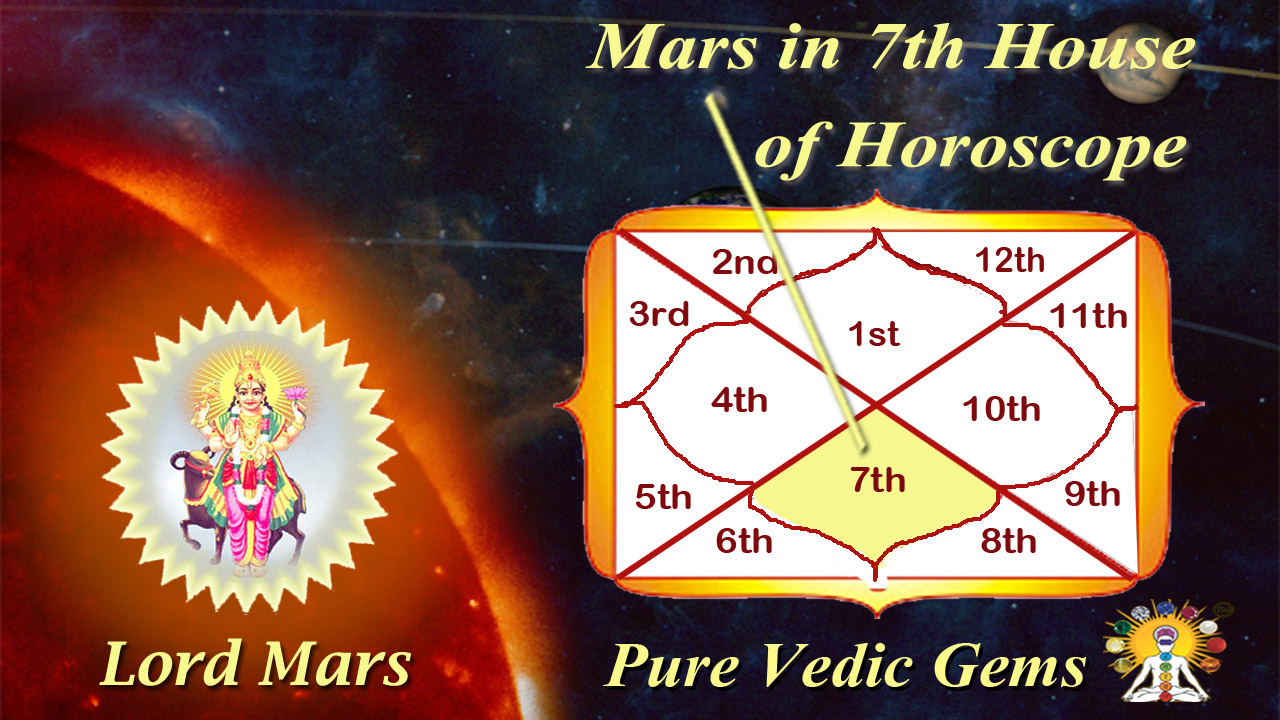 MARS IN THE 7TH HOUSE

This is one of those difficult positions of Mars of which learne astrologers are afraid to predict in the matter of adversely affectin, the marriage prospects, and after marriage, the married life itself.
This (and the 8th house) position of Mars positively harms, damages, injures, and sometimes destroys the marriage and married life of the individual. Mars in the 7th house is bound to give quarrel-some and fault-finding nature, and since ‘spouse’ is the first element ruled by the 7th house, spouse becomes the first target or participant in quarrels, disharmony and maladjustment between the married couple or two lovers. One of the main remedies to meet this situation is to find a matrimonial match having Mars in the 7th or the 8th house. Experience of several generations of astrological practical knowledge and practice indicates that no other remedy is workable to wipe off the harmful effect of Mars in the 7th house on marriage and married life.

A person with Mars in the 7th house is a hard bargainer in business deal or even in minor transactions, provided that Jupiter is also in a benefit-giving house. These people are good fighters, but not very competent or efficient strategists in large-scale fights, battles or a war. If properly guided or properly induced they give an outstanding account of themselves in matters related to ordnance and weaponry. Some of them suffer from ailments connected with blood system(including menstrual cycle in women), functioning of the heart.Mars in the 7th house also causes skin ailment, headache, tuberculosis and ailments linked to extreme anger, and  any minor or major ailment of the genital parts.

Mars in 7th house and Jupiter in 6th 8th or 12 th house are very likely to drag the individual into litigation on civil matter or into a criminal charge. In other words Mars itself generates such disputes and quarrels (specially related to women, wine and, wealth, including property) as may lead the individual to a legal forum. Further because it is related to criminal acts or association with criminals and connection with contrabands, it might lead to financial loss, penalty, fine and a jail term too.

If Mars is in a cardinal Sign, it might lead an individual to take domicile in another country, state county or district. It becomes all the more imperative if Moon or Venus is in the 9th 10th or 11th house. If lord of the 7th house is in the 8th, 3rd or 4th house, the individual would acquire immovable property another country.

Separation with spouse owing to circumstances, parental pressure, mal-adjustment is also a destiny created by Mars in the 7th house. Depending on mahadasa and sub-period of Mars or Saturn or influence of Saturn or Rahu (by transit movement) with the 7th house or in the 7th house itself and Mars therein, the separation is very likely to last a long term.

As already stated above, Mars in the 7th house can lead to divorce, moreso if Mars’ own mahadasa or sub-period intervenes within 10 years of the marriage. It can lead to beating, torture, violence or even loss of limb or life at the hands of the spouse or relations thereof. Not only in India, but in developed and undeveloped and semi-developed countries too, cases of ‘marital violence’ are not rare, whether they get reported or not, or go before a court of law or not.

And married life is such a matter that divorce or death of one of the partner naturally affects the other partner too in in mrriage. No doubt in may countries now second and third marriages are rampant and a common feature. The evil effect of Mars on marriage and married life has been described here in detail. it is for the readers and affected persons to take guidance from the paragraphs above or not.

The above impact of Mars in the 7th house takes us to the question as to when this torture or separation or violence of the extreme type can occur. For this purpose, one must study

(a) the Yearly-chart (annual progressive chart);

(c) these two elements should be read with mahadasa and sub-period.

(d) The transit position of Mars, Jupiter, Saturn and Rahu during the relevant year of age for which the Yearly-chart has been drawn.

(e) One important element known to very few learned astrologers even in India is the ‘ Tripataka-chart’ (crossroads chart) relating to the Yearly-chart under study.

If the planetary position in the Yearly-chart and its cross-road-chart have very harmful position of Mars (and/or Saturn or Rahu), and the mahadasa or sub-period (antardasa) are also of damaging stars, the astrologer should caution the person consulting him or her about disturbance to married life. However if the husband is against the wife, and the husband is consulting the astrologer, any such hint from the astrologer about planets harmful to the wife might encourage the husband to torture or hurt her all the more. The same position can be read otherwise too from the wife’s side towards the harm to the husband. Cases of wife or beloved hurting the husband or the lover are also not rare under influence of Mars in the 7th House. The substance is that the astrologer should not put hints in the mind of the individual or the spouse that might lead to further deterioration to their married life.

It is indeed a duty and responsibility of the astrologer, who prepares the detailed horoscope of any individual to indicate in advance the risky periods to married life in the case of the individuals who have Mars in the 7th(or the 8th) house.

An individual with Mars in 7th house and Rahu or Venus in 8′ house or Saturn and/or Venus in 12th house should avoid, as far as possible to have unrestricted sexual relations with any member of the opposed sex, unless both are officially and legally married husband and wife.

Now with tremendous progress in science, one very big problem has cropped up. About 90% of the population get their horoscopes made by computer system. A computer cannot give such detailed and minute study of the Mars in the 7th (or the 8th) house as a learned, experienced and unbiased astrologer can give. This position of planets applies to extra-marital affairs too.

Normally it happens that individuals with Mars in the 7th house, whether they know this fact or not, indulge in extra-marital relationship, and Mars is bound to adversely affect that relationship as well.

Person, who have Mars Planet in Seventh House with good aspect and placement or lord of 7th house then he or she can wear Red coral Gemstone. This will boost up their administration ability, business skills, successful career and help in business. If Moon placed with negative aspects then he or she do Hanuman Chalisa.