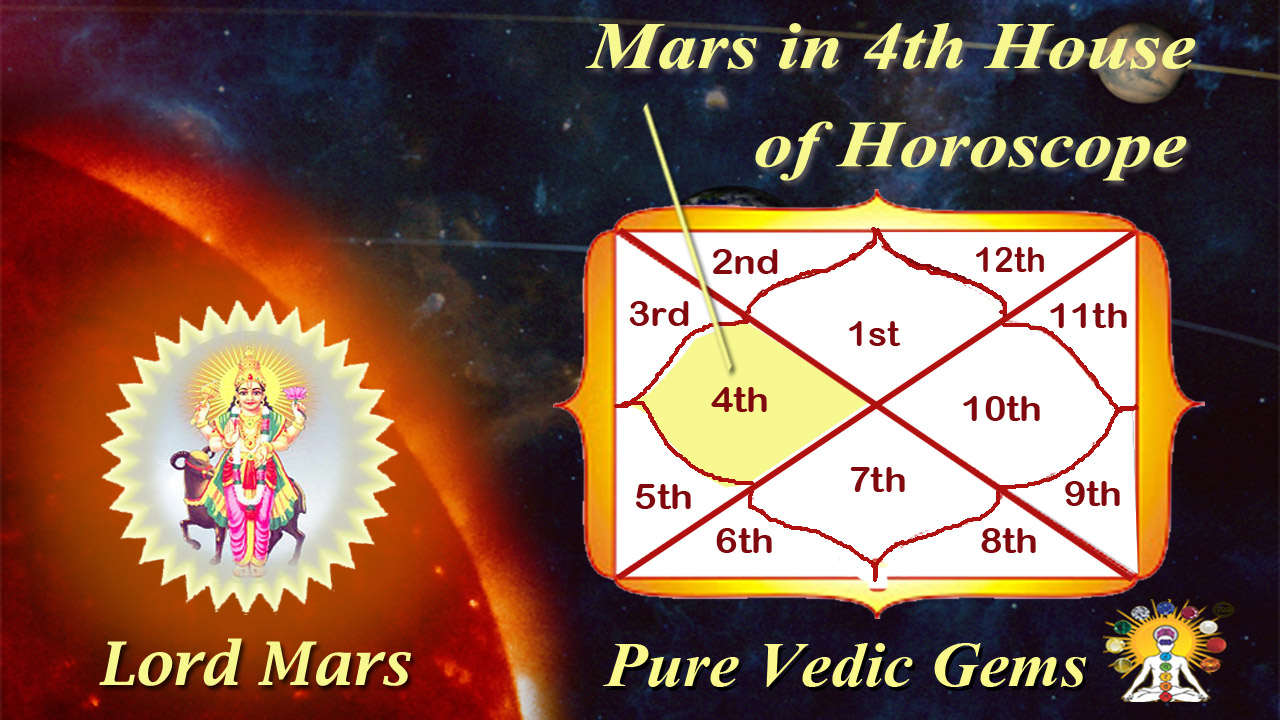 MARS IN THE 4TH HOUSE
This is an important position of Mars, as this House concerns mother, heart, conveyance, getting moveable and immoveable assets in direct inheritance from natural parents or from adopting parents or even without adoption, just as a gift Results of Mars in this House depend on the Rasi in this House. If a Rasi is owned by Mars itself or by Sun or Jupiter, the individual would have cordial relations with mother, would get her full affection and protection in childhood. Mother would oppose the child being sent to a residential school. The individual would inherit property from parents. No doubt, it would be at late stage in youth for the person to own a conveyance of comfort, but conveyances of comfort owned by others would always be at his or her disposal.

The individual would acquire, build or buy own proper. too in addition to what has been or has not been received in inheritance or by adoption. If these individuals keep away from smoking and drinking on a regular basis, their heart would function perfectly well even beyond the 60’s of age.
These people get respect and acceptance from people in position and power. When a strong Marsh is in its own Rasi or in a Rasi owned by Sun or Jupiter in the 4t House, the person would wield a position of power. In this context, do not miss the point that it is Mars alone which always has full drishti (aspect) on a house which is in the 7th position from the House or Rasi occupied by Mars, irrespective of the distance in terms of degrees.
THUS, MARS IN 4TH HOUSE HAS FULL DRISHTI (ASPECT) ON THE 10TH HOUSE, AND THE 10TH HOUSE RULES CAREER, PROFESSION, BUSINESS, MAIN SOURCE OF INCOME, AND POLITICS. And therefore Mars in the 4th house would prove very helpful in these matters for the individual. Mars in 4th house makes a person bold, daring, dashing and competent to face difficult situations, and also die-hard enemies and adversaries, in life. And on top of all qualities, generally these persons are generous in material matters and liberal in helping or accommodating others, including destitute and helpless people. But at the same time, these individuals don’t tolerate insubordination, indiscipline, disobedience and lack of loyalty. They have force in what they say, and they have force in their voice too. These individuals make very efficient and successful commanders of combatant forces and armed constabulary.
They are generous to a fault, if it is admitted by the wrong-doer. Only pressure of circumstances can compel these individuals to dispose of property in full or inpart, and they generally stick to the price quoted by them. At thesame time, they are straightforward in any transaction, and do nothave any intention to cheat or exploit anyone for own advantage. But Mars in a Sign owned by Saturn, Venus, Mercury, or Moon is a different story. Then, they are diehard in their
approach to men and matters. They often do not surrender their ground. They refuse to yield, even at a heavy cost to themselves. They sell the ancestral property at the drop of the hat. They have intentions of usurping the share of other claimants in the property. If Capricorn is in the 4 House, these people rise to position of power, high or low and assert themselves more forcefully than their actual position.
As a matter of general caution, these individuals should always stay careful against injury by accident (including fall from a high level or on slippery ground), heart ailment, disturbance in blood system, maladjustment between mother and spouse, because in the process these individuals suffer double pressure helplessly.
Their vehicles meet with accidental damage more often than normal. Injury to the human body may broadly be categorised of two kinds: one which gives bleeding, and the other a blunt
one, without bleeding, Mars is associated with injuries causing bleeding. Thus, Mars in the 4th rarely fails to give bleeding injuries in the childhood and adolescence, including sometimes any injury of the head (skull).
When Mars is in the 4th House and Sun or Moon in the 9th or the 10th House, there are strong chances of the person . , enjoying inheritance by adoption or by way of gift. If Mars is in Aries, Leo or Capricorn, the person leaves the parental family in infancy itself on being adopted by someone related to the family but living separately. If Mars is in Taurus, Scorpio, or Pisces, someone living jointly with the natural parents adopts the child.
As mentioned above, Mars in the 4th creates differences between mother and spouse, which means it disturbs the married life ill coati Person.
Remedies –
Person, who have Mars Planet in Fourth House with good aspect and placement or lord of 4th house then he or she can wear Red coral Gemstone. This will boost up their administration ability, business skills, successful career and help in business. If Moon placed with negative aspects then he or she do Hanuman Chalisa