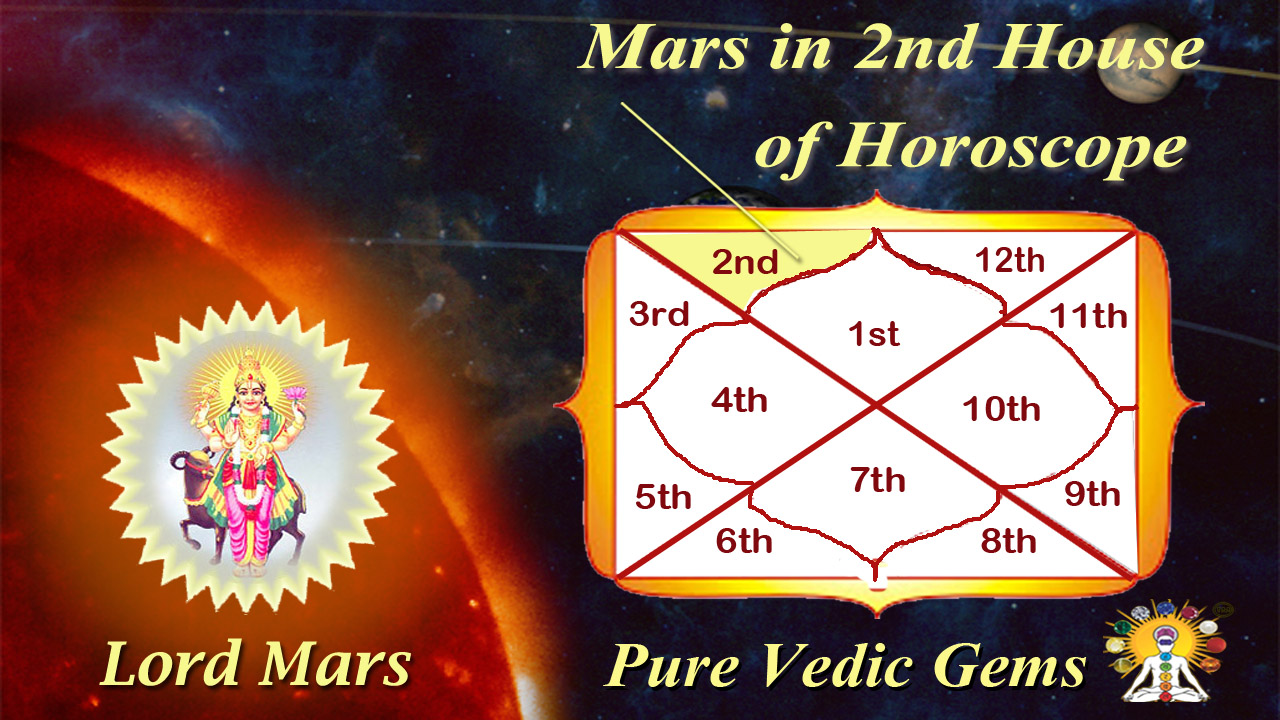 Mars in the 2nd house of horoscope

MARS IN THE 2ND HOUSE
Second House concerns wealth, monetary possessions, ownership of immovable property, gains and savings. Mars, when alone, has positive adverse effect on this aspect of life. Normally it strikes twice in life, more often after the person has assumed working for livelihood or holding assets even without working but leading towards livelihood.
If Mars happens to be lord of the 4rh or the 10th house, Mars brings loss of money or assets to one or both parents during the childhood of the individual. Otherwise Mars operates during its mahadasa or its antardasa under any other planet, irrespective of helpful or unhelpful position of that planet. Mars hurts and harms .the money position and assets even if its own Rasi is in the 2′ House.
Mars spares the person if either the spouse has countermanding effect in his or her Birth-chart or Mars has assumed position helpful to wealth and money in the Navamsha and Trinsharisha-charts (former in case of men and latter in case of women). The second influence of Mars is that it adversely affects the health of the spouse, because it is in the 8th position from th 7 th house in the case of women the trouble is often related to menstrual system,pregnancy,trouble at the time of birth of a child caesarean birth skin or blood system problem to the newly

born infant, sometimes surgery to the wife on account of some other inner trouble. In the case of men, Mars in 2″ House gives complaints of the blood system, skin ailment, trouble to one of the eyes, trouble in hearing (at advanced age), gradual loss of teeth immaturely, and bleeding. it can give injury of any part of the body, but at least to the skull during Mars antardasa under any planet or repetitive placement of Mars in the 2nd or 8th house in the Yearly-chart.
This position of Mars normally tempts an individual to part company with old property, (moreso any inherited property) and attempts to acquire or build new property, or acquire other immoveable or moveable assets by the cost of the price sold. In the process the individual generally suffers some loss of money. Going by the South Indian school of thought, this position of Mars sometimes hurts the married life, and in rare cases, bring separation or divorce, because that school of thought attaches much importance to Mars in the 2nd House being in 8th position from the 7th house. On a parallel level, the North Indian school of thought attaches importance to Mar’s position in the 12th from the Ascendant, because it is in the 6tn position (that of an enemy) from the 7th house ruling married life. In the opinion of the authors, Mars in 2nd or 12’h house is harmful to married life, and sometimes to monetary possessions too. Though Mars doesn’t totally forego its 2″d House effect on wealth, money and property when in the company of other Planets, it does relax and relent in its effect of dusa-mverg disturbance to the married life or affecting health, of spouse adversely.
Remedies –
Person, who have Mars Planet in Second House with good aspect and placement or lord of 2nd house then he or she can wear Red coral Gemstone. This will boost up their administration ability, business skills, successful career and help in business. If Moon placed with negative aspects then he or she do Hanuman chalisa