MARS IN THE 12TH HOUSE

MARS IN THE 12TH HOUSE 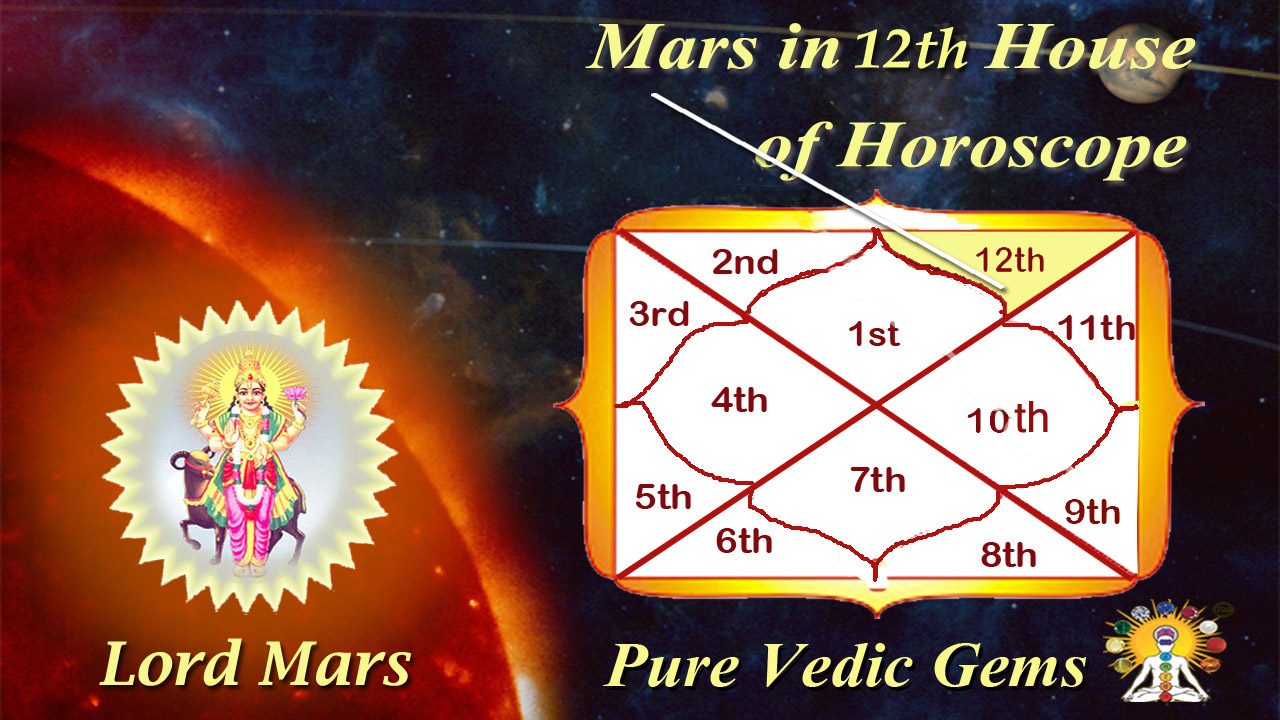 Benefits of MARS in 12th House of Horoscope :

This position of Mars is of general caution for an individual in matters of behaviour, conduct in private and in public life, expenditure, wrong actions like taking or giving bribes or gratification of any kind. Social offences, criminal acts, penalty and punishment including imprisonment (i.e. jail sentence with or without hard labour), cruelty to own progeny, medical termination of pregnancy adversely affecting the health of the spouse are some of the results which can easily be attributed to Mars in the 12th house.

Mars in 12th can lead an individual to seek premature retirement from service owing to personal circumstances or pressure from the employers, or dismissal from service. Any kind of loss in business, loss by fire and electricity is also caused by Mars in the 12th house. It can cause losses by domestic help and other regular employees, physical attack by own people or by outsiders including opponents, adversaries, thieves, robbers, and dacoits. Man-made disaster to factory or electricity generation and distribution system can be attributed to Mars in the 12th.

The individual might be accused of involvement in acts of theft, dacoity, robbery, smuggling, trading in contraband goods, sheltering criminals, addiction to drinks and other intoxicating drugs or dealing in these drugs. Economic drainage as a consequence of these activities, besides adverse effect of bad habits on married life or wider family life or social life can easily be included in the unfavourable effects of Mars in the 12th house. These results adversely affect the working capacity of the individual.

Certain individuals may have to face enquiries or survey or Investigations against their acts of commission and mission. Some individuals suffer heavy losses in betting at the racecourse, gambling, card-games, speculation, and losses for any other reasons. This position of Mars many a time leads to sale of property or other assets to cover up losses and for settlement of debts or sale of one property to acquire another property. Loss of property by encroachment, division in joint family, for education or medical treatment of progeny, for payment of alimony (periodically or in a lump sum settlement) may be included in the results of Mars in the 12th house. Another source of loss of cash or property can be under order of a forum of law, any other empowered department of the government, or even local government or by social and communal formations.

On the favourable side, Mars in the 12th house leads an individual to give substantial help in cash or kind by way of donation or gift to any social, charitable, educational or medical cause. It could be donation of property or premises too.

Dismissals from service, and even death-sentence also fall under the results of Mars in the 12th house.

Putting one’s own self into the background for advancement of the spouse falls within the influence of Mars in the 12th house.

Mars can cause disturbed menstrual cycle to ladies or other blood-system-disorder to either of the two sexes, but this position of Mars in isolation normally doesn’t lead to actual heart attack, inspite of angina ailment.

It may also be noted that this position of Mars is counted among Defects of Mars for marriage and married life, but it is considered as one of the soft-type defects (Mangal Dosh).

One of the important impact of Mars in the 12th house is that it gives bleeding injuries to the individual often upto the age of 12 years, in some cases extended to the age of 24 years.

Further, minor or major surgical operation is also caused by Mars in the 12th house, moreso in the case of females, which will include caesarean delivery of child or clearance of pregnancy in advanced stage thereof.