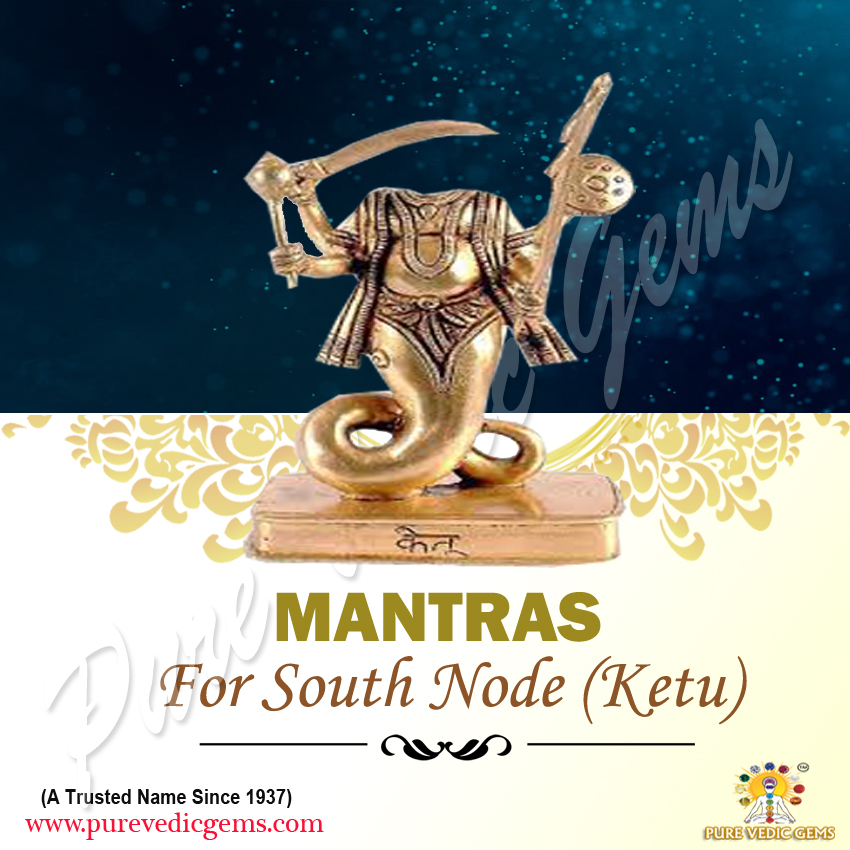 MANTRAS FOR SOUTH NODE KETU : Ketu is the planet of spirituality. Ketu represents the spiritual process of evolution. Ketu is also not a material embodiment and is referred to as chaya graha (Shadow planet). Ketu is the southern point where the path of earth around Sun cuts the path of Chandra. Like his counterpart Rahu, he is also the significator of any sudden event be in an accident or a lottery gain. He indicates secrecy, dissatisfaction, hidden enemies, greed, proficiency in foreign and artificial languages like computer languages. He represents foreign or alien religious believes, obsessive personality. Mass tragedies and mysterious disease. He causes abortions, rifts in married life as well as domestic problems. The difference between the significations of Rahu and Ketu is that the effects caused by Ketu are not as severe as those caused by Rahu. However, the mental agony, uncertainly turns the individual to God. Ketu signifies intelligence, liberation, wisdom, non-attachment, deepinsight, and psychic abilities, Regular propitiation measures to Ketu removes possibility of accidents, insect bites, allergy etc., The remedial measures to Ketu reduce mental worries and mysterious fears.

As in the case of Rahu, when Ketu is not afflicted it showers its blessings to the house it occupies. Ketu is worshipped in the night on Saturday.

The sage of the Mantra is Madhu Chand. The metre is gayatri. The deity is Ketu. The idol of ketu should be made of brass. The mantra is to be recited for seventeen thousand times. 1/10/ of homa be done with Kusha leaves and 1/10 of homa is done as tarpan and 1/10 of tarpan be done as marzan. After that the devotee should donate articles of Ketu. After realisation of the mantra brahmins are fed with rice mixed with green pulses (Khichri). Mantra for recital is :-

ajaaytha astrayee phat (clap, after taking circle around your head).

Take smoky coloured flowers in your hands and do dhyana as under.

After dhyana perform mental pooja of Ketu as under.

Now perform Pooja of Ketu by taking rosary in the hand and resite the following mantra for the rosary.

Now start reciting mantra facing towards east direction. Ketu mantra for recital is as under.

Other Ketu mantras for recital are :