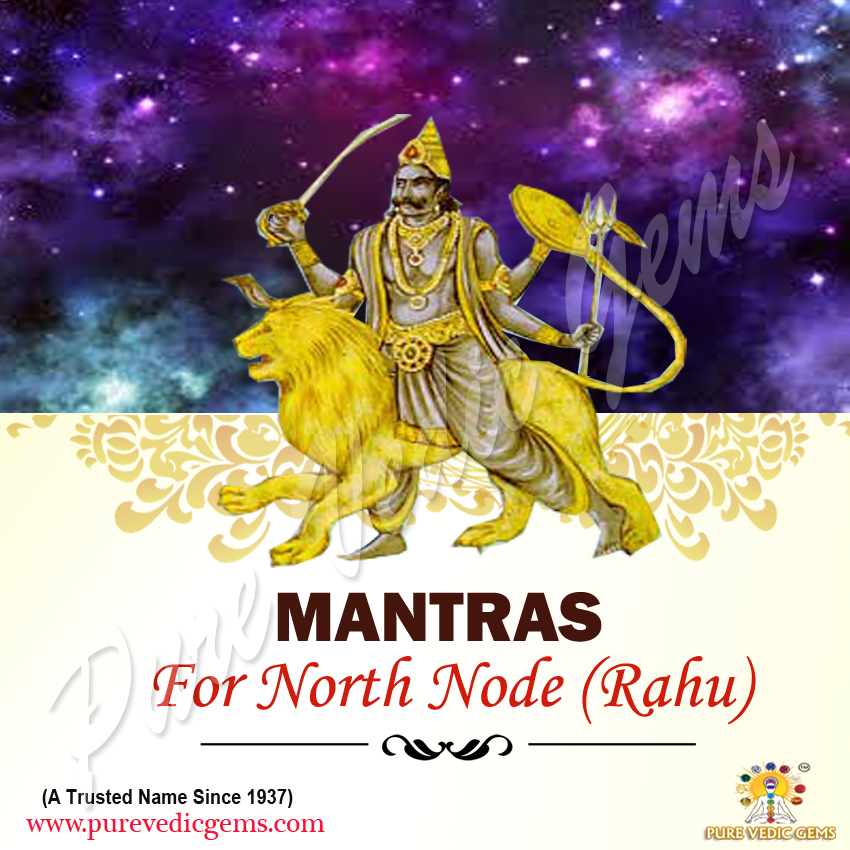 Mantras for North Node, The North Node of Chandra ( Moon ) is called Rahu in Hindu astrology. Rahu is not a material embodiment and is referred to as chaya graha ( Shadow planet ). Rahu is the northern point where the path of earth around Sun cuts the path of Chandra. When Moon, Sun and earth come in the same plane near to Rahu, the eclipses are caused. Rahu is a malefic and afflicts the planet he is associated with. He is the significator of any sudden event may be in an accident or lottery gain. He indicates  secrecy, dissatisfaction, hidden enemies, greed, proficiency in foreign and artificial languages like computer languages. He represents foreign or alien culture, obsessive personality, mass tragedies and mysterious diseases. He causes abortions, rifts in married life as well as domestic problems. In certain houses in the chart rahu is better for example, in the 6th house. Regular propitiation measures to Rahu removes above problems. The possibility of accidents, snake bites, allergy etc., are reduced.

Rahu is worshipped in the night on Saturday. Rahu sadhana is more effective & beneficial if performed on Sarvarth siddhi yoga falling on Saturday. Rahu is worshipped with the idol made of lead. The sage of the Mantra is vamdev. The metre is gayatri. The deity is Rahu. Rahu worship is done with the articles of Rahu with lamp of mustard oil. After sadhana, articles of Rahu like hessonite, lead, blue cloth etc., should be donated. Feeding an elephant is also considered beneficial for propitiation of Rahu.

The mantra is to be recited for eighteen thousand times. 1/10 of homa be done with durva leaves and 1/10 of homa is done as tarpan and 1/10 of tarpan be done as marzan. After that the devotee should donate articles of Rahu. After realization of the mantra brhmins are fed with rice.

Vrata kartalkar pristhabhayam namah ( Touch the back of the palms).

Vrata astrayee phat ( Clap, after taking circle around your head).

Take blue flowers in your hands and do dhyana as under :-

After dhyana perform mental pooja of Rahu as under:-

Now perform pooja of Rahu by taking rosary in the hand and recite the following mantra for the rosary:-

Now start reciting mantra facing towards east direction. Rahu mantra for recital is as under:-

Other Rahu mantras for recital are :-