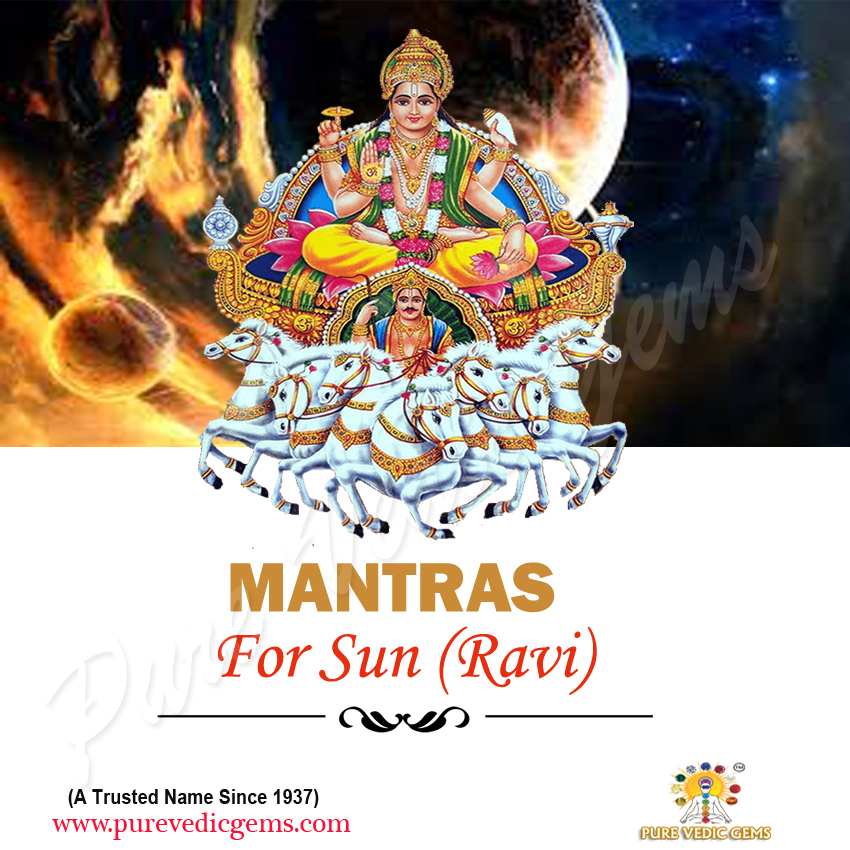 Mantras for Sun, the Sun God known by the names Ravi, Surya, Bhanu, Arka, Mithra and by several other names. In fact Rigveda is full of praise, describing Him by several names and qualities. He is Atmakaraka (Shznificator of soul). Being at the centre of the solar system, Sun is the giver of life force to all the other planets and the life everywhere. He indicates father, honour, status, fame, the heart, the eyes, respect and power. In Rudhra Prashna he is given as an example of living God (“The Gopas say the Invisible is Visible here”). He is also referred as a Kavi, the poet who sees everything. Ravi gives clear perception. In his name Trijakalpa Suryanamaskara (a pooja for Ravi) is conducted on Sundays. Propitiation measures to Ravi strengthens bones, cure illness particularly of cardio vascular nature, gives progeny, gold, restores honour and dignity. However, the exact role Ravi plays is dependent on his ruler ship, placement and association as well as aspect in the natal chart.

The sage of the Mantra is angiras, metre is tristup, deity of the Mantra is Sun God. The mantra is to be recited for seven thousand times, starting from Sunday. 1/10 of the mantra is performed as homa with the twigs of Aak and of 1/10 of homa to be done as tarpan and 1/10 of that it should be marzan. After that the devotee should donate articles of the Sun. During worship of Sun God the devotee is advised to use idol made of copper. Besides this mantra Surya is also worshipped with Surya stotra and Aditya liridywn.On Ravipushya yoga, start reciting as under:

Take red flowers in your hands and do dhyana as under.

After dhyana perform mental pooja of Sun God as under.

Now perform pooja of Sun God by taking rosary in the hand and recite the following mantra for the rosary.

Now start reciting mantra facing towards east direction. Sun mantra for recital is as under: