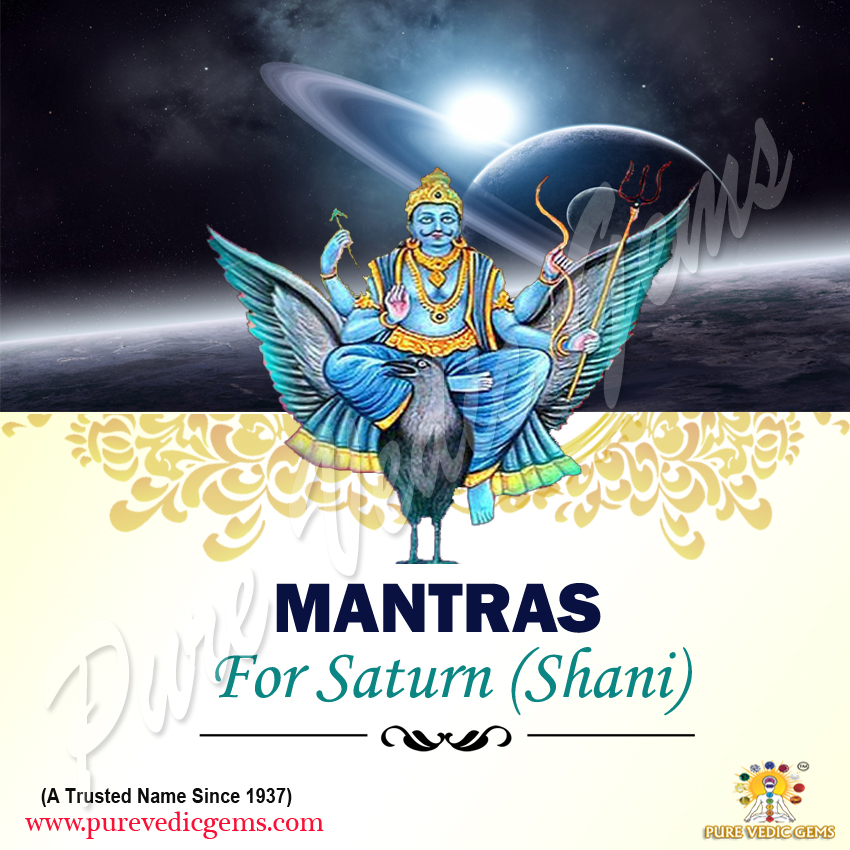 Mantras for Saturn, Shani also known as Manda means slow. It also means to be full of forgiveness, tolerance and peace as in “shankara’,

“shanno danti prachodayat”. Saturn indicates the solitaire life and spirituality. He signifies cold diseases, hard work, public office, political success and chronocity of any disease. Saturn is a karaka of anything slow –be it a disease, a long stay in the office. A well posited Shani gives excellent longevity. Similarly, Shani would cause delay in the aspects of life he is associated. Shani is incharge for bones and quality of blood. Adverse Shani would cause fractures, dental problems and anemia. Remedial measures to Shani will mainly reduce the delays, cure from cold and bone disorders and also reduce the adverse effects of Shani caused by his position, ownership and association in the chart.

On a Saturday, on which sarwath siddhi yoga is there and moon is favourable to the devotee, recital of Saturn mantra is to be started. The mantra is to be recited twenty three thousand times. 1/10 of homa with twigs of shami and 1/10 is done as tarpan and 1/10 of that is should be done as marzan. Shani should be worshipped with the iron made idol.After that the devotee should donate the articles of Saturn. After recital of the mantra the devotee should feed Brahmins as per his capabilities. The food of Brahmins should include articles made of black sesame or powder of black sesame should be used as one of the ingredients of the food.

When Saturn is malefic in a horoscope, in transit or causes the 7.5 years cycle, recital of Shani mantra is very beneficial along with mritunjayee. It is also recommended that the native should observe fast on Saturday and worship Lord Saturn with its kavach, stotra and mantra. The sage of the Mantra is Ddhyadgathavarn. The metre is gayatri. The deity is aapo. Worshipping lord Hanuman is advised during the sadhesati of Saturn. The mantra for recital is :-

Sarvantu astrayee phat ( clap, after taking circle around your head).

Take blue flowers in your hands and do dhyana as under:-

After dhyana perform mental pooja of Saturn as under :-

Now perform pooja of Saturn by taking rosary in the  hand and recite the following mantra for the rosary.

Now start reciting mantra facing towards  east direction. Saturn mantra for recital is as under.

The Saturn mantras for recital are :-