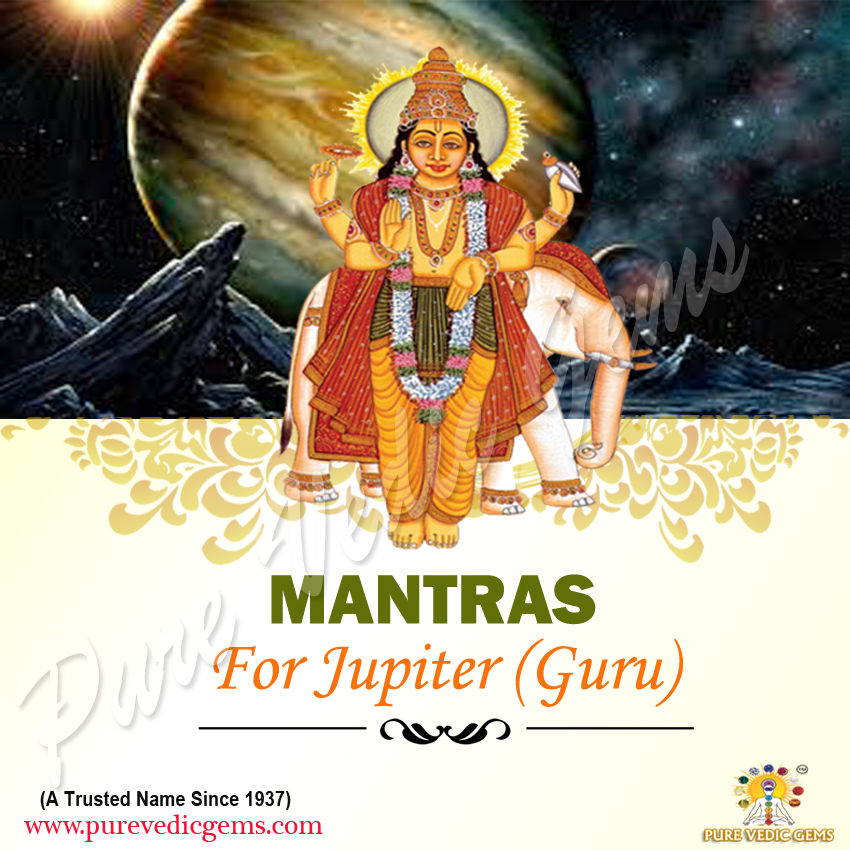 Mantras for Jupiter. The planet Jupiter is known as Guru or Brihaspati. He is putra karaka (thc significater) of children. Guru ill placed would cause problems related to children as well as delay in child birth. He governs digestive juices and affliction to Guru will cause jaundice. He bestows vidya (wisdom) which is essential to understand any subject in depth. He is revered as the teacher of all Gods. He is the dispenser of divine justice. No other planet hates Jupiter as he himself is Providence. He gives good manners, patience and devotion. Many of the problems in life are successfully combated if Jupiter is strong in the chart. The remedial measures to Guru are easy to perform. Even if there are lapses in the process (Anustana), being kind-hearted, he does not mind. Regular recitation of Guru will give a firm support from the Almighty and reduce the problems in life. Remedial measures to Guru are of most importance for begetting children as well as to gain in-depth knowledge.

Recital of Jupiter mantra is started on rising moon Thursday, in a temple or pooja place. Jupiter mantra negates the malefic effects of planet Jupiter and bestows power, rank and authority. Jupiter Mantra is best for profession and business. The seat to be used in worshipping the mantra is kusa asana ( seat made of grass )bow maim (seal made of grass).

The sage of the Mantra is gritsamad. The metre is tristup. The deity of the Mantra is Brahaspati. This mantra should be chanted for nineteen thousand times. The idol of the lord of the planet should be of Gold. During worship, it should be chanted at six in the morning everyday. The one tenth of the mantra should be done homa, and one tenth of homa be tarpan and marzan. The flowers to be offered for Jupiter are yellow, fruits and othe offerings should also be yellow. If the devotee wears yellow coloured clothes, it would give better results. After realization Brahmins should be fed with curd and rice. The mantra is recited daily to ward off evil effects and increase the benefic effects of Jupiter, in the horoscope.

Mantra for recital is:-

Darvinamdehichitram astrayee phat ( clap, after taking circle around your head).

Take yellow flowers in your hands and do dhyana as under:-

After dhyana perform mental pooja of Jupiter as under:-

Now perform pooja of Jupiter by taking rosary in the hand and recite the following mantra for the rosary:-

Now start reciting mantra facing towards east direction. Jupiter mantra for recital is as under.

Other Jupiter mantras for recital:-