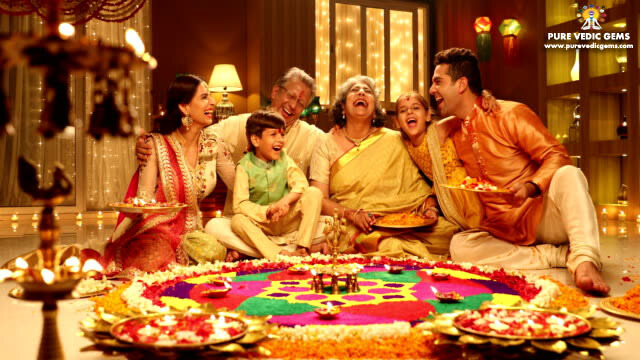 Diwali also known as Deepavali and the “festival of lights”, is an ancient Hindu festival celebrated in autumn every year. The festival spiritually signifies the victory of light over darkness, knowledge over ignorance, good over evil, and hope over despair. The festival preparations and rituals typically extend over a five day period, but the main festival night of Diwali coincides with the darkest, new moon night of the Hindu Lunisolar month Kartika. In the Gregorian calendar, Diwali night falls between mid-October and mid-November.

Before Diwali night, people clean, renovate and decorate their homes. On Diwali night, Hindus dress up in new clothes or their best outfit, light up diyas (lamps and candles) inside and outside their home, participate in family puja typically to Lakshmi – the goddess of wealth and prosperity. After puja (prayers), fireworks follow, then a family feast including mithai (sweets), and an exchange of gifts between family members and close friends. Diwali also marks a major shopping period in nations where it is celebrated.

Diwali is an important festival for Hindus. The name of festive days as well as the rituals of Diwali vary significantly among Hindus, based on the region of India. In many parts of India, the festivities start with Dhanteras, followed by Naraka Chaturdasi on second day, Diwali on the third day, Diwali Padva dedicated to wife–husband relationship on the fourth day, and festivities end with Bhau-beej dedicated to sister–brother bond on the fifth day. Dhanteras usually falls eighteen days after Dussehra.

On the same night that Hindus celebrate Diwali, Jains celebrate a festival of lights to mark the attainment of moksha by Mahavira, and Sikhs celebrate Bandi Chhor Divas Diwali dates back to ancient times in India, as a festival after the summer harvest in the Hindu calendar month of Kartika. The festival is mentioned inPadma Purana, the Skanda Purana, and other Sanskrit Hindu scriptures; the divas (lamps) are mentioned in Skanda Purana to symbolically represent parts of sun, the cosmic giver of light and energy to all life, who seasonally transitions in the Hindu calendar month of Kartik.

King Harsha in the 7th century Sanskrit play Nagananda mentions Diwali as Deepapratipadutsava, where lamps were lighted and newly engaged brides and grooms were given gifts. Rajasekhara referred to Diwali as Dipamalika in his 9th century Kavyamimamsa, wherein he mentions the tradition of homes being whitewashed and oil lamps decorating homes, streets and markets in the night. The Persian traveller and historian Al Biruni, in his 11th century memoir on India, wrote Diwali being celebrated by Hindus on New Moon day of the month of Kartika.