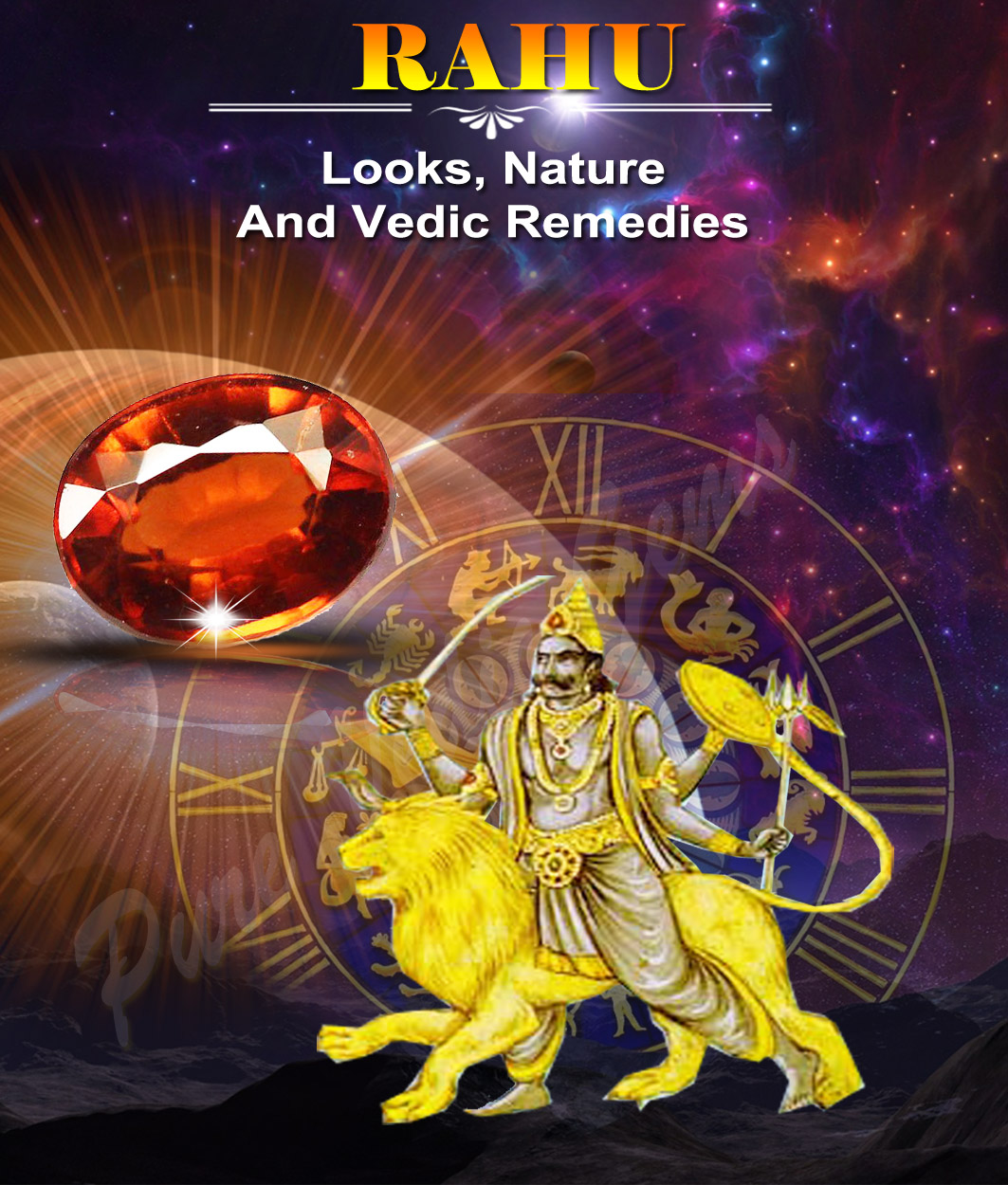 Although Rahu has a fearsome face, he wears a beautiful crown on his head, a garland around his neck and black clothes. He holds a sword, an iron shield, a trishul, while the fourth arm is in the varmudra pose. He is positioned on a powerful lion.

Son of Singhika (mother) and Viprachihtiki (father), Rahu is also known as Singhkikaya, after his mother. He has a hundred brothers, and is one of the strongest and cruellest. He is a dark shadow planet.

Rahu does not rule over any zodiac sign, and all the Puranas define Rahu as half-bodied, yet extraordinarily powerful.

The nature of Rahu is vata karak (dry/airy).

After the churning of the ocean, when the pot containing the Nectar of Immortality was brought forth by Dhanwantari, the deities and demons stood in two separate queues to receive their individual share of the Nectar. Rahu quietly transformed his shape and form to that of a deity and stood among the deities, but he was recognized by the Sun and Moon. Even as they pointed out that he was not one of the deities but actually Rahu the demon, he had already tasted the Nectar.Vishnu promptly sent his Sudarshana Chakra flying towards Rahu, which cut off his head, but he did not die. It was believed that whosoever drank the Nectar of Immortality never died. So from that day, he was transformed to a planet. It is also believed that ever since the Sun and Moon revealed his identity — that he was a demon — he is in enmity with these two, and the solar and lunar eclipses are a result of this enmity.

Rahu is always associated with material needs and worldly desires. He is also helpful in earning fame and name. He creates greed and lust, as well as endows one with manipulative powers. He develops obsessive behaviour patterns in a person, like a cleanliness freak, or a workaholic or one who eats in excess, and can create an environment where diseases thrive and obstacles and accidents keep recurring when unfavourable.

How to Please Rahu

Worship Lord Shiva to please Rahu. His powerful japa. The Maha Mantra removes all of sorrows and problems.

The Mantra is as follows :

The meaning of Maha Mrityunjaya Mantra is : ” I worship the sweet Lord of transcendental vision ( three eyed one Lord Shiva ). O giver of Health and Prosperity to all, may I be free from the bonds of Death, just as a melon is severed effortlessly from its bondage or attachment to the creeper. ”

The Beej Mantra for Rahu is:

The Best time to worship Rahu is at night, and the best count for his Mantra is 18,000, Rahu prefers black colour to all colours, and his ruler is Goddess Durga and the Supreme is Sarpa.

Wear Hessonite to please him.