MARS IN THE 11TH HOUSE

MARS IN THE 11TH HOUSE 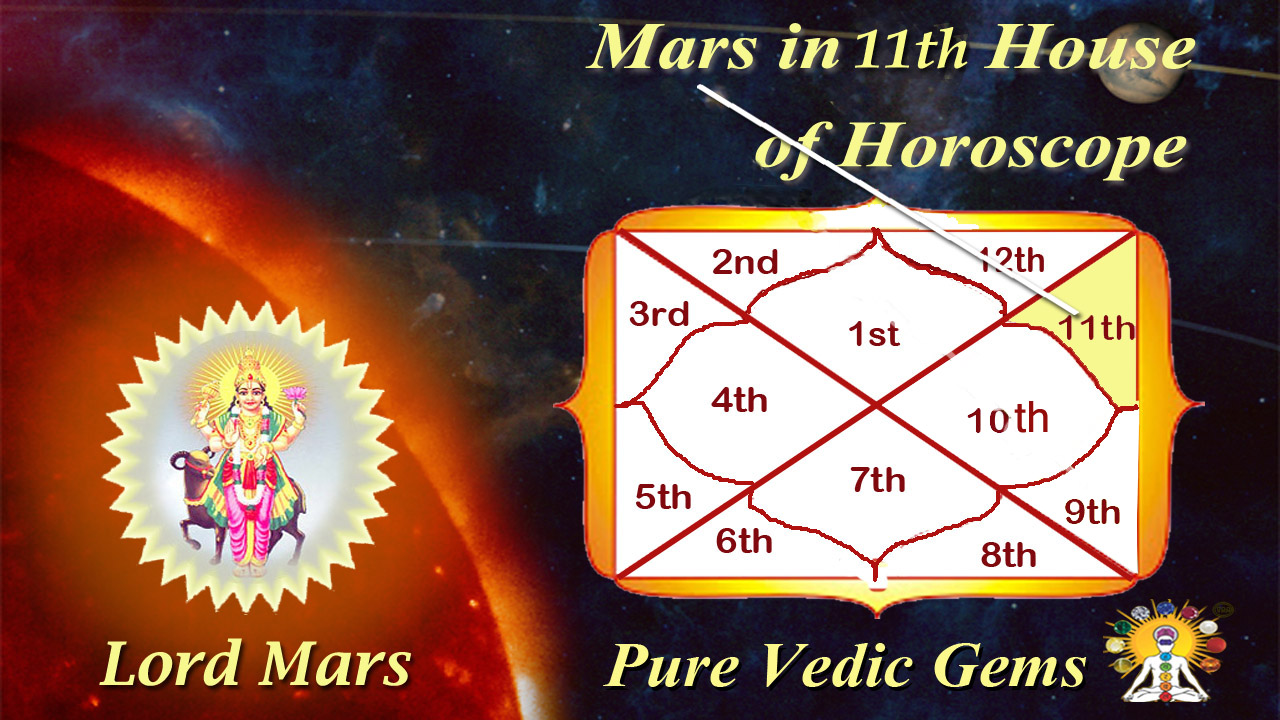 Benefits of MARS in 11th House of Horoscope :

This is one of the most, beneficial positions of Mars in any horoscope, notwithstanding the Rasi in the 11th house.

Though Mars in 11th house with direct drishti on the 5th house, which rules education, naturally creates some untenable and inconvenient phases in school and post-school education. No doubt, Mars in the 11th house assures full results for an individual’s effort towards earning an income or livelihood for self and the family. In some cases, when Mars occupies its own Rasi (Aries or Scorpio), or Rasi of its exaltation (Capricorn), or Leo or Sagittarius or Pisces. it is capable of giving unearned income to the individual. It helps in succeeding to property and assets, other than the ancestral or parental one, through adoption or gift. It is more or less sure that Mars in the 11th house makes the individual owner of one or the other immoveable asset, property etc., by fair or foul means, so much so that the individual might encroach upon someone else’s property and subsequently manage to get it regularised. In some cases the individual buys a property by his or her own earnings or savings. Yet in some other cases, the individual, whether a man or a woman, gains ownership of property by marriage, which can be joint ownership or independent ownership.

If Sun is also favourable by its position in 3rd, 4th, 6th , 8th, 10th or  11th house itself, the individual has bright chances of selection to a high-ranking cadre under the government or in any public sector formation. Otherwise the individual gains a position of power in politics.

Mars in the 11th house in not concerned with fair or foul means in earning income. Income from any source or by any means is always income, nothing else! One of the sources can be bribery too owing to holding a position of public dealing or position of power. It can also be liaison work in corridors of power.

If Mars is in its own Rasi, Aries or Capricorn, the individual is unhesitant in use of cunningness, tricks, falsehood, force and violence in achieving one’s ends. The individual would not hesitate even to hurt the feelings of mother (real or adoptive),  elder brother, or elder sister for success in aims, ambitions, and Intentions. The individual, whether man or woman, would have no hitch in usurping assets of the elder brother or sister of self or the spouse.

Mars in the 11th house casts full drishti on the 5th house, irrespective of the difference in degrees. The 5th house rules begetting children. Mars does favour, and disfavour, in the same breath in this regard. It grants a male child as heir and successor which a majority public (at least in India) is desirous of at all cost.  And the same Mars causes natural or man-made loss of one or more pregnancies. However this matter equally depends on the stars of the spouse too. In so far as the number of progeny is concerned, it too depends on the stars of both husband and wife. But family planning and laws of the land too interfere in regard to number of progeny.